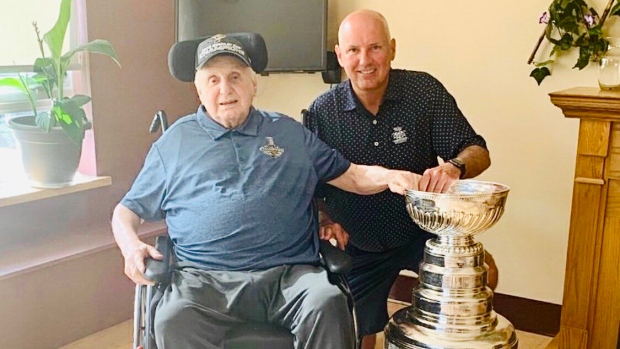 Currently, his son, Doug Armstrong, is the general manager of the St. Louis Blues, and on Sunday, the Blues announced that Armstrong had passed away early in the morning at the age of 87.

Our thoughts and prayers are with Doug Armstrong and his family as his father, Neil Armstrong, passed away early this morning. Neil worked as an NHL linesman and officiated 1,744 regular-season games before retiring in 1978. He was inducted into the Hockey Hall of Fame in 1991. pic.twitter.com/5843x3NH3Y

The hockey world paid respect to the Hockey Hall of Famer, sending their support to the Armstrong family.

Prayers and thoughts are with the Armstrong family. Neil was one of the best. Doug carries on that tradition! RIP Neil. https://t.co/mwqIWdJPsE

Father of the GM was a legendary NHL linesman in the of 60s and 70s when those guys were key personalities of the game and you knew all their names. #RIP https://t.co/mzyDUYj3Jf

Here's how respected Neil Armstrong was - when his son was looking to get a job with an NHL team, Bobby Clarke, then North Stars GM, hired Doug solely because of how much respect Clarke had for Doug's dad from his playing days. Condolences to the Armstrong family on this loss. https://t.co/CAbHPYVV0H

My deepest sympathies are with the Armstrong family. https://t.co/NL8MWtbtzp

Horrible news. I’m old enough to remember Neil Armstrong as a great linesman. Prayers for the entire Armstrong family. 2020 continues to be a very forgettable year. 🙏🏻

So sorry to hear this news. He was so much part of the "family" watching all those games with him working the lines.

RIP to a hockey legend