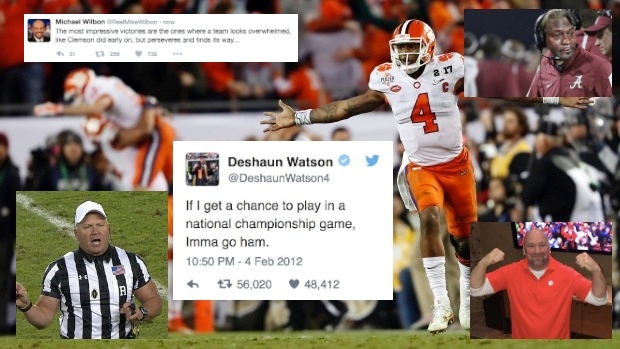 At this time last year, the Alabama Crimson Tide took down the then-top-ranked Clemson Tigers in the College Football Playoff National Championship game to go home college football’s best team of the year.

On Monday night, Clemson got their revenge. In a thriller of a football game, Clemson came out on top 35-31, after a 4th quarter that went back and forth.

When there's a championship as insane as this one, college football fans, sports fans, and sports writers and broadcasters alike reacted to the game in a fashion almost as entertaining as the game itself... but not quite.

Clemson gets College Football Playoff National Championship revenge on Alabama, winning the rematch 35-31 in a thriller.

The NCAA basketball and football titles were both incredible, both won on final play of the game (Villanova, Clemson).....

This should be the Sports Illustrated cover pic.twitter.com/gmzLBql385

Clemson shocks Alabama with a 35-31 victory in the National Championship! pic.twitter.com/EwAGiB9CK3

He may never let go of this ball. #CFBChampionship

"Congratulations to Clemson! As a special bonus, I'm happy to announce that the Cleveland Browns are not permitted to draft any of you."

DeShaun Watson is the first Heisman runner-up QB to win the national title since Vince Young in 2005.

Both wins were pretty exciting. pic.twitter.com/3xcYZGJWS8

I'm sorry, it's the only way I can express emotion. pic.twitter.com/k6sKG6eRHG

Is this right there w USC v. Texas as greatest title game ever?