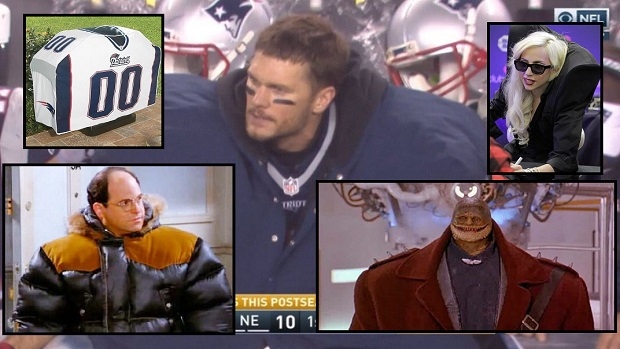 All eyes are on the New England Patriots and Pittsburgh Steelers on Sunday night as football fans wait to find out who is going to play the Atlanta Falcons in the Super Bowl. With the game being in prime time, it means more camera operators working the game, which means they are not missing a single thing all night long.

During the game, they got a shot of Tom Brady on the sidelines rocking his classic oversized jacket on the Patriots bench. Since we’re talking about Brady of all people, you can bet the Internet had a field day with his insanely oversized jacket.

Dunno why Brady is heisting a TV under his coat but I admire the boldness pic.twitter.com/9NsDssfjJk

Brady looks like three kids standing on top of each other in that coat pic.twitter.com/HFhtaXgBoe

Couldn't find a picture of Tom Brady's big jacket on Twitter so I had to draw one pic.twitter.com/1mOChxJOUe

Tom Brady got his jacket from 1984-era David Byrne. pic.twitter.com/YgpFPJ1QZK

Why is Tom Brady wearing a grill cover as a jacket? 😂 pic.twitter.com/qtir2tyGgy

Tom Brady is a fashionable man, but it’s clear that he’ll take warmth over style on the sidelines any day of the week.