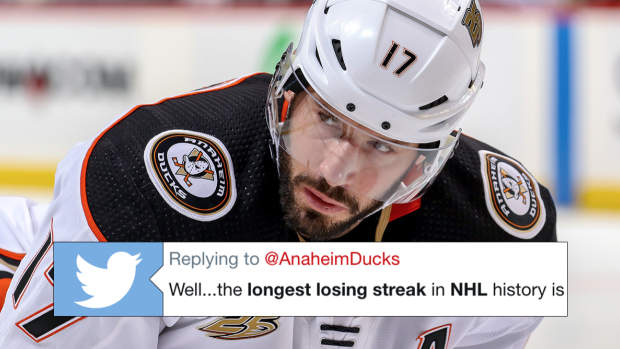 On Tuesday night, the Anaheim Ducks lost 3-1 to the Detroit Red Wings and the loss extended their losing streak to 12 games.

Rough times for the Ducks Captain 🦆

Whenever a team enters double digits in the loss category, the question that enters the minds of many is "What is the longest losing streak in hockey history?"

Ducks fans will be happy to know their team is still a handful of games away from matching the all-time record, but they're quickly climbing this list that no team wants to be on.

Five more losses and the Ducks will be tied with the 1974/75 Capitals and the 1992/93 Sharks for the longest losing streak in the history of hockey.

Looking ahead to the team's next six games, five of them are on the road and three of them are against playoff teams.  In other words, it's not out of the question that this streak extends to 18.

17 losses in a row is an NHL record. The Anaheim Ducks are 5 away. pic.twitter.com/WE6vgM4E6Z

The craziest part of this losing streak, though, is that the Ducks are just two points back of a playoff spot.  For real.