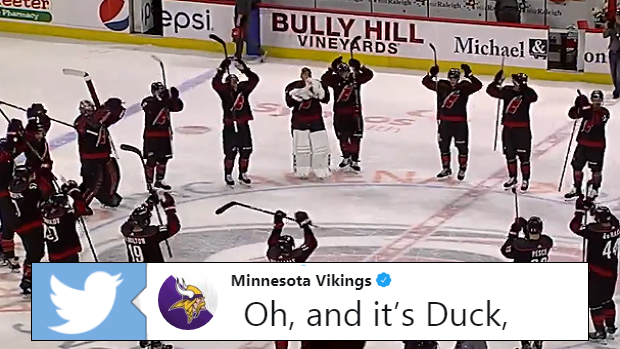 If you’ve been following the Carolina Hurricanes then you’ve become very familiar with their post-game celebrations this season. After home wins, the players have typically met at center ice to get the fans fired up with a creative new cheer. Regardless of what they do though, captain Justin Williams and his teammates usually throw in a classic Viking ‘skol’ chant. Well, another team that uses the same chant from the NFL took notice and didn’t seem too impressed about it.

The Minnesota Vikings chimed in on Twitter and not only questioned why they were doing it, but also pointed out that they used the wrong words to describe the nursery game they played afterward. Shots fired?

They do raise a good point… It definitely makes more sense for the Vikings to ‘Skol’ than the Canes. But hey, it’s made for the best hockey tradition this year so we’re not complaining!

The #Canes played a game of duck, duck, goose for their latest post-win celebration 🦆 • (🎥 Via @nhlcanes)

About the whole ‘Duck, Duck, Grey Duck’… apparently that's how to say it in Minnesota??

@NHLCanes
We welcome you to Vikings Nation. ~SKOL~ 🙆🏿‍♂️🙆🏼‍♀️🙆🏽‍♂️🙆‍♀️🙆🏻‍♂️🙆🏾‍♀️
But if you use our Chant, you must inform your announcers it is Duck, Duck, Grey Duck.
Because it is.

At least there’s one Minnesota native who’s rep’d the skol chant hard in the past (IN MINNESOTA). During a game against the Wild at the Xcel Center last season, Jets forward Blake Wheeler whipped one out of his own in support of the Vikes.

The Wild head to Carolina on March 23rd and things could get awkward if the Canes comes out on top.