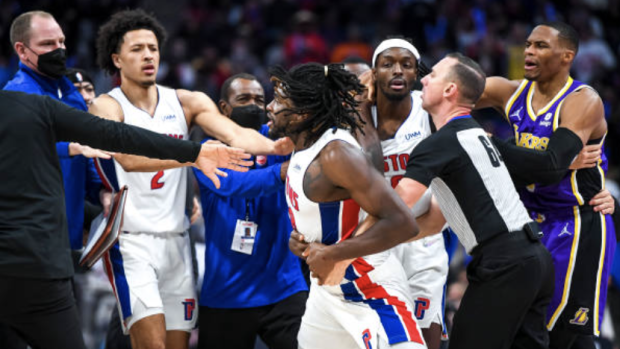 The NBA announced on Monday the suspensions for LeBron James and Isaiah Stewart and fans are not impressed with it.

The suspensions come a day after an altercation the two got in on the court in the Lakers 121-116 win over the Pistons.

Mayhem in Detroit as LeBron and Isaiah Stewart get into it. 😳

The league decided that James will sit out for one game, while Stewart is suspended for two. Some NBA fans are pretty heated with the decision.

Detroit Pistons center Isaiah Stewart will be suspended two games for his role in the roughhousing with LeBron James on Sunday. James was suspended one game.

A wide range of fans are upset with the league and their decision. Many are claiming that LeBron’s is too short of a suspension or not even equal when LeBron started it with a vicious foul.

Comical. What a farce https://t.co/NGtbYcsEoz

The perpetrator gets a less severe sentence than the victim. You love to see it. https://t.co/W2KLC7R9Sn

Imagine being suspended longer than the guy who literally punched you in the face… NBA = 🤡’s https://t.co/yHYYGiBoPb

WHAT IN THE FAVORITISM https://t.co/D38uCuHMPq

lol so LeBron backfists a guy and gets half as many games. classic https://t.co/uTCovU62QW

Do you think LeBron should have been suspended more games?