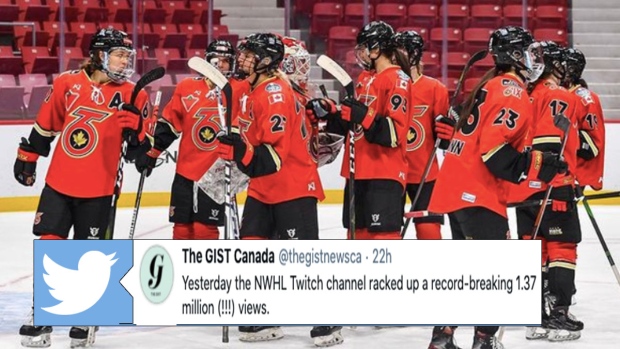 If you're just becoming a fan of women's hockey, you picked an excellent time to hop aboard.

The NWHL's highly anticipated bubble season is already a smashing success, and fans have been totally gripped by the caliber of hockey so far.

Nothing says 'hockey' like Saturday night, and this week proved to be a historic one for the NWHL.

This Saturday's games were two of the most highly anticipated match ups of the bubble that saw Buffalo play Boston and Toronto take on Minnesota. Both of the games provided more than enough of the Saturday night hockey magic that fans were dreaming of. Buffalo edged Boston in an exciting 2-1 contest, and Toronto handed Minnesota their first loss of the bubble thanks to a Mikyla Grant-Mentis go-ahead goal in the dying seconds of the game that snatched the Six a 4-3 win.

The games provided more than enough entertainment to keep fans engaged, and the number of views on the league's Twitch steam just proved that.

According to TwitchTracker, the NWHL's two games on Saturday racked up a combined 1.3 MILLION live views on Twitch. You can see all the data here!

If you watch it, they will come!

We know that this is just the beginning and there's a long way to go, but this proves what many already knew - that there's a massive interest in watching women's sports.