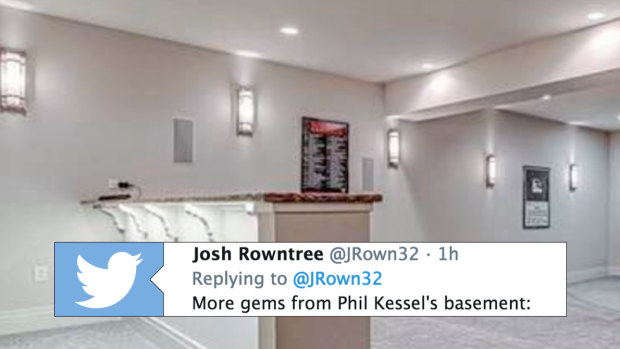 In case you haven't heard, a two-time Stanley Cup champion by the name of Phil Kessel has put his stunning Pennsylvania mansion up for sale.

Kessel was traded to the Arizona Coyotes earlier this summer and selling/buying a house is all part of the trade process.

Rather than dive into that process, though, we wanted to highlight some of the best details of Phil's mansion that you may have missed if you just skimmed through the pictures, starting with his theatre room.

Is this picture the new Fresh Prince empty house meme?  If so, we'd absolutely be on board with that.

i can't tell what's funnier about phil kessel's house, the single seater home theater or the walk in wine cellar with nothing but 4 bottles bailey's in it pic.twitter.com/Qji9Xc79Gn

leaked photos from phil kessel’s house confirm that he is every bit the legend we thought he was pic.twitter.com/J0K0RHu6mi

Kessel also has some incredible movie posters in his basement and one has a special message to him on it.

The self-portrait is also a phenomenal work of art that deserves to be available for purchase.

Kessel also has an office in his house that features two mini Stanley Cups among other trophies that he's won which all players who win an award or Cup are given.

There's also something resembling a road sign with his last name on it in his kitchen and we imagine that will be accompanying him to his new house.