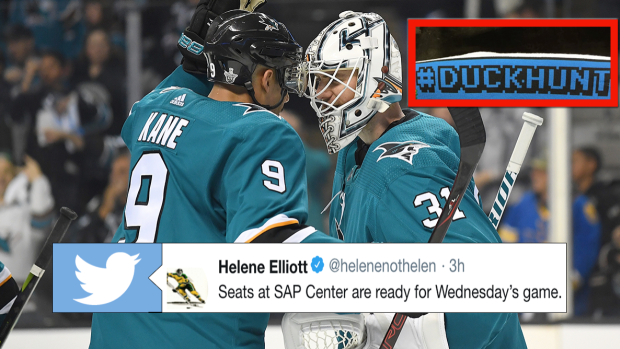 The San Jose Sharks are one win away from sweeping their way to the second round of the playoffs.

Game 4 between the Sharks and Ducks goes down Wednesday night from the Shark Tank in San Jose and the fans are going to be well equipped to cheer against the visitors with these awesome 'Duck Hunt' themed towels.

Seats at SAP Center are ready for Wednesday’s game. pic.twitter.com/jKGlkstu8D

San Jose has gone with the Duck Hunt theme for their towels for home games this series and this was the one the handed out to fans for Game 3.

Ready to be waved! 🌪#DuckHunt

The only problem with the newest towel is that the idea has already been done before:

That shirt featuring Bailey hunting a couple of Ducks was from 2014, but there are only so many unique ways to go about incorporating Duck Hunt into a towel or shirt.

If there's any reason for fans to be upset, it's that the series might not make it back to San Jose for Game 6, so fans won't be able to get another towel.