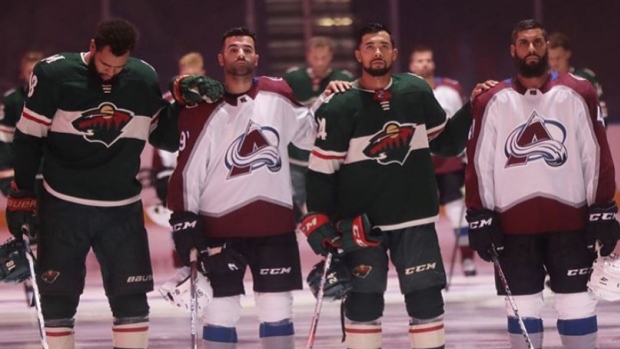 Across the NHL, hockey players are finding their own ways to make statements in support of equality, and a popular method for many teams so far has been to stand together during national anthems.

The Minnesota Wild and the Colorado Avalanche joined in the gesture before their exhibition game on Wednesday, with Avalanche players of colour Nazem Kadri and Pierre-Edouard Bellemare standing with from Matt Dumba and Jordan Greenway from the Wild.

The Wild and the Avalanche stood together in solidarity ahead of their exhibition game today. ••• 📸: @coloradoavalanche

It made for a pretty striking image, and after the game, Kadri called for the NHL to make a stronger acknowledgment of the current social climate as players have.

Nazem Kadri wants to see a little more acknowledgment from the NHL regarding injustice and racism.

On Tuesday, the first day of exhibition games around the league, teams including the Penguins, Flyers, Leafs and Canadiens stood alongside each other during the national anthems, and we expect more to join in as the games continue.

The #Penguins and #Flyers stood together in solidarity for the playing of the National Anthems in support of Black Lives Matter. . (📷: @philadelphiaflyers)

The Leafs and Habs pay tribute to Eddie Shack before their game 🙏 . (🎥: Twitter/kristen_shilton)