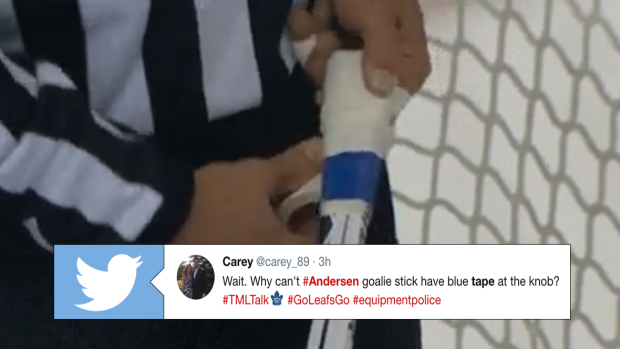 During the Jets and Leafs game Wednesday night, there were a couple of interesting situations involving equipment and a Leafs player.

The first incident happened early on in the game as Leo Komarov got a penalty for illegal equipment.

Komarov on visor penalty: "I'm trying to go for the Lady Byng this year (smile) it's not going to be easy"

The Leafs killed the penalty, but fans were a little upset about the call because it's rarely seen.

Something that you also don't see often is a referee taping a goalie's stick for him during a game, but that's exactly what happened to Frederik Andersen.

Another equipment violation for the Leafs, but this time the officials just make Andersen cover up his blue-coloured grip tape pic.twitter.com/gntTWyklI4

Andersen had blue tape on the knob of his stick last year, so using that colour of tape isn't new.

We checked the NHL rulebook for the 2017-18 season and here is what we found about goalie stick tape for the knob of the stick:

There's no explanation as to why goalies have to have white tape on the knob of their sticks, but some fans pointed out the reason on Twitter once they noticed what was happening.

If that's the reason behind the rule, then it completely makes sense and just like in the preseason, hockey fans saw that the officials are keeping an eye out for a lot of little things like this this season.