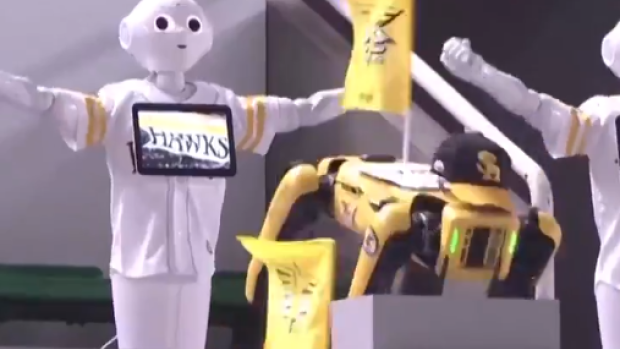 We’re now months into quarantine, and sports continue to trickle back. While major sports leagues continue to try to find ways to operate, one thing is certain about the plans; there will be no fans for a while.

With coronavirus spreading so rapidly, it doesn’t make sense for fans to gather and risk inflated infection rates. Instead games are being played without fans, but that doesn’t mean there’s nothing in the stands.

We’ve seen cardboard fans, stuffed animals, cutouts of player’s families, and even heard simulated crowd noise. The Fukuoka SoftBank Hawks of the NPB (Nippon Professional Baseball) took faux fanning a step further when they introduced their latest cheerleaders – a section of robot “fans” that dance to the team’s fight song.

Robots filled in for fans at the Fukuoka SoftBank Hawks’ baseball game on Tuesday in Japan, and they danced to the team's fight song. Spectators haven't been allowed at games because of the pandemic. The robots will perform at home games through July. pic.twitter.com/ZIlWZk5uIF

What do you call the feeling when you’re half terrified, half impressed, and 100% intrigued?

Confused. We are oh sooooo confused.