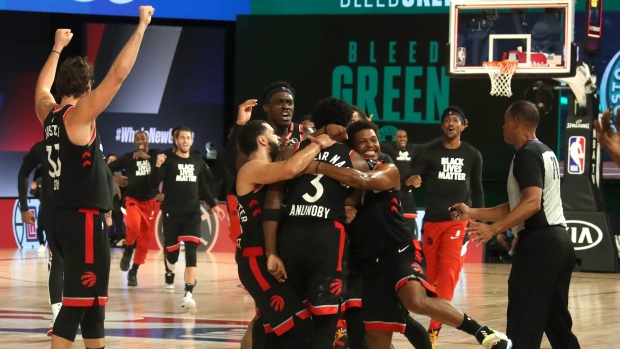 The newest sensation sweeping the sports world is NBA Top Shot, a virtual marketplace for collecting NBA highlights in a manner similar to trading cards.

Players and fans alike have gotten into the phenomenon, with some seriously mind-blowing prices being listed for some of the most valuable moments in recent basketball history. (Plus, we’re sure that as time goes on and NBA Top Shot begins to release historical moments, those will have significant value as well.)

Going through the top moments on the NBA Top Shot marketplace right now, we can see which Raptors highlights are commanding the most significant price — and which ones mean the most to fans. All prices are listed in US dollars.

For as great as he is, Pascal Siakam isn’t much of a shot-blocker in the frontcourt, without many highlight-reel rejections to his name. This is definitely one of them, though. When you stuff King James like this, well, as you can see, it really is worth a lot.

One of the most widely-replayed moments from last season, Kyle Lowry was honestly just looking for the foul call here. He didn’t get it, but still earned his three points the hard way. It’s the arms raised, wondering where the call was, for us.

Ooh, it’s a little surprising to see this one so high, although it definitely was a clutch bucket. How often have we seen Lowry work defenders in that elbow area in late-game situations? Too often to count, and this one from two months ago was for the win against the Charlotte Hornets.

Lowry with a BIG bucket with under a minute to go 😤 pic.twitter.com/Peab80141T

Oh yeah. We remember this one. It was from the first time that the Raptors wore their pinstripe throwbacks in the 2019-20 season, with that glorious and psychedelic court to match. Fred VanVleet decided that he’d take some angles on this day.

Now, comparatively, this sounds like a bargain. This OG Anunoby shot to win Game 3 against the Boston Celtics last year might be a cooler moment than any of the others above, with all due respect. Come on! That Kyle Lowry pass? OG’s reaction? IN THE PLAYOFFS? AT THE BUZZER, FOR THE WIN?