Matthews destined to be the greatest Leaf ever?

They seem to pop up every year. A fan, for whatever reason, will jump the guy on a championship tattoo before a team has even accomplished anything. Heck, we haven’t even entered the 2021 NHL postseason and  Leafs fan seems to already think his team has this year’s Stanley Cup in the bag.

One very bold member of Leafs nation decided to get a little premature ink, and the cherry on top? It’s on his @$$. When we say this is one of the ugliest tattoos we’ve ever seen, we mean it. No offence but if you’re going to get a tattoo like this, at least get it done right! 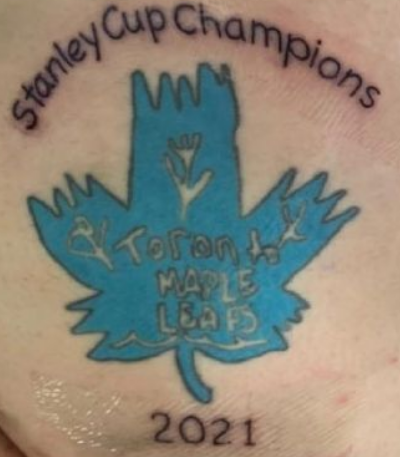 BRO. What is that. It looks like a Dr. Seuss animation… yikes.

Again, why do people think this is a good idea? Like this Cowboys fan who obviously jinxed his team with his tat ahead of Super Bowl 52… he actually got it revised, and will probably need to keep doing so until the ‘Boys actually win something.

“Only those who dare to fail greatly can ever achieve greatly.” I know 100%. I had a vision! @dallascowboys SUPER BOWL 52 CHAMPS! pic.twitter.com/t2jpAzf7RR