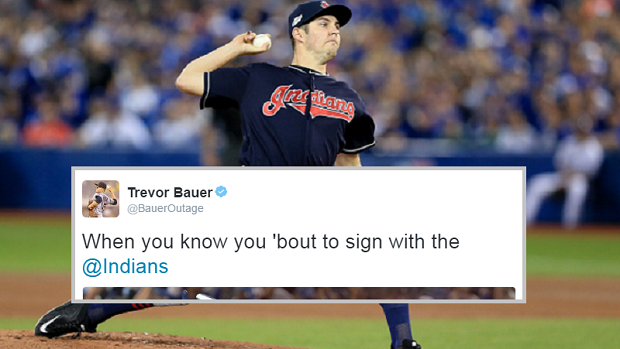 Trevor Bauer has been trolling Canadians and Blue Jays fans for a while now. Before the teams ever faced off in the 2016 ALCS, Bauer tweeted this after Cleveland beat the Jays on Canada Day:

He tweeted other troll tweets as Toronto and Cleveland continued to build a rivalry in the playoffs. Now, fan-favourite Edwin Encarnacion has switched jerseys and joined Cleveland on a three-year, $60 million contract with a club option in the fourth year. That called for some more trolling from Bauer.

When you know you 'bout to sign with the @Indians pic.twitter.com/ZwTKbk5PLC

That’s Edwin’s wild-card walk-off home run featuring the crowd as a bunch of Crying Jordans. The pain might not be over for the Blue Jays either, as Jose Bautista’s status as a free agent remains a mystery at this point.

With some space in their outfield, it’s not of the question that Bautista could sign there as well, although there has been no connection between the two so far this off season.

Even without Bautista, Cleveland has added some another “circumstance” to their roster.