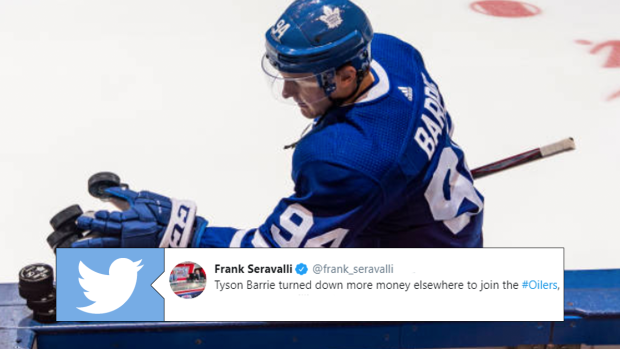 Tyson Barrie’s short stint with the Toronto Maple Leafs didn’t fully go according to plan for the D-man. While Barrie showed flashes of his offensive prowess, he never seemed to really get it going, and the Maple Leafs still struggled mightily on defence.

It’s put the 29-year-old in a position where he wants to prove his worth. The way to do that is to sign a one-year deal in a situation where you think you can earn a bigger contract next year when free agency rolls around.

For Barrie, that situation is the Edmonton Oilers. It was announced on Saturday that Barrie would sign a one-year deal at $3.75 million to join the team.

The #Oilers have agreed to terms with defenceman Tyson Barrie on a one-year, $3.75 million contract.@Rogers | #LetsGoOilers pic.twitter.com/rWnxgKhudO

The situation makes sense for Barrie, as it will allow him an opportunity to play on a power-play with Connor McDavid, Leon Draisaitl, and Ryan Nugent-Hopkins. While other teams like the Colorado Avalanche and Vancouver Canucks were also reportedly in the running, the situation in Edmonton was one Barrie couldn’t pass up.

How much so? This much.

Tyson Barrie turned down more money elsewhere to join the #Oilers, including a $6 million offer.

That is betting on yourself.

Power-play time is likely a big reason why Barrie chose to target Edmonton as a destination. With young stars Quinn Hughes and Cale Makar manning other blue lines with the man advantage, Barrie likely wanted a chance to prove himself in an area he has found a lot of success in the past.

A lot of people may not understand why he would turn down a contract close to double the Oilers offer, but if all goes according to plan Barrie may be setting himself up for a much bigger contract in the future.