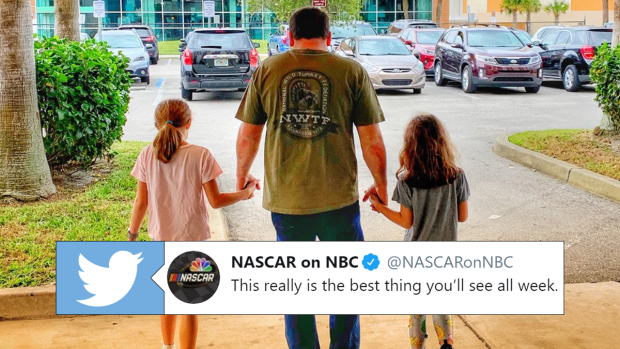 Autoracing is entertaining to watch for a number of reasons, but every once in a while it becomes very, very scary. When drivers are traveling at 200+ miles per hour, a crash can prove to be fatal. While crash-proofing is more present in autoracing than anywhere else, disasters can still happen in a second.

With the Daytona 500 coming down to the wire, Ryan Newman was leading the pack heading into the final moments of the race. Rounding the final turn, minor bumping between Denny Hamlin, Ryan Blaney, and Ryan Newman resulted in Newman swerving out of control into the side wall, where he was then hit by Corey LaJoie.

Here is the final lap of the Daytona 500 in which Ryan Newman's car was flipped at the line.

We will continue to keep you updated on his status as we learn more. pic.twitter.com/qkEwQBpoP0

Been watching Nascar for 10 years, I think that was without a doubt the worst wreck I have ever seen.

PHOTO : A chilling photo of Corey Lajoie moments after getting out of his battered #32 car. Lajoie hit Ryan Newman’s flipping #6 Ford coming to the finish on last lap of the Daytona 500, sending it airborne. Lajoie would limp his car across the line 8th. (📸 Unknown) pic.twitter.com/g3LX57bjLX

The resulting wreck is about as scary as it gets, and Newman was quickly transported to Halifax Medical Centre in serious condition. Two days later, video emerged of Newman leaving the hospital with his two daughters.

This really is the best thing you’ll see all week.@RyanJNewman walks out of the Halifax Medical Center.

Ryan Newman is fully alert and walking after Monday night's accident in the Daytona 500.

Ryan Newman has been treated and released from Halifax Medical Center pic.twitter.com/J0twhGgQm7

The Daytona 500 was the site where legendary driver Dale Earnhardt lost his life, making it that much more gratifying to see Newman leave hospital on his own.