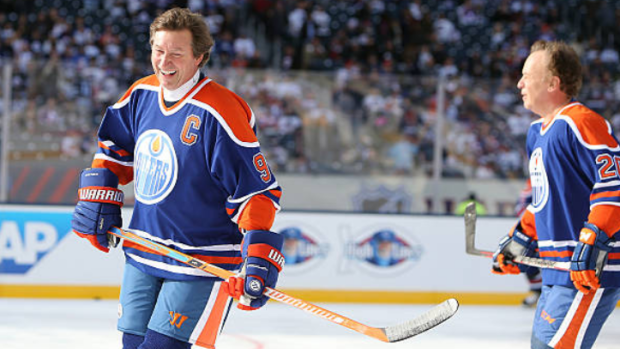 Teaming up with Andrew Peller Limited, the Great One is expanding his popular Niagara-on-the-Lake company to launch the No. 99 Rye Lager.

The beer will be available in LCBO stores in May, restaurants in Ontario, and the estate itself.

"Our goal at the outset was to give hockey fans and beer fans something new to cheer about," said John Peller . "As the name promises, No. 99 Rye Lager, brewed with rye grain delivers the crisp, clean taste of a classic lager with an extra layer of depth, zest and freshness. There's nothing like it on the market."

Introducing our new No.99 Rye Lager by Wayne Gretzky Craft Brewing. Brewed with rye grains, we’ve turned up the flavour of a classic Canadian lager & added layer of depth & freshness. Available in May at the LCBO, Wayne Gretzky Estates & select bars/restaurants in Ontario pic.twitter.com/R8w4zT2j1O

Wayne Gretzky is getting into the craft beer biz with No. 99 Rye Lager. Be sweet if he opened a full craft brewery in his hometown Brantford to give Walter a place to hang out. pic.twitter.com/Or1OLfeKUF

Gretzky's company dabbled into the whiskey business by launching Red Cask Whiskey after their successful debut with Whisky Oak Aged Red wine. Gretzky Estates has produced award-winning wines across the country using grapes from the Okanagan and Niagara area.

The lager is said to only include four, all-natural ingredients using a Canadian Winter Rye Grain

"I love the refreshing taste of our new easy-drinking No. 99 Rye Lager," said Gretzky, via Yahoo Finance. "I worked closely with our Master Brewer, Joshua Beach . I am truly excited to share it with fellow Canadians."