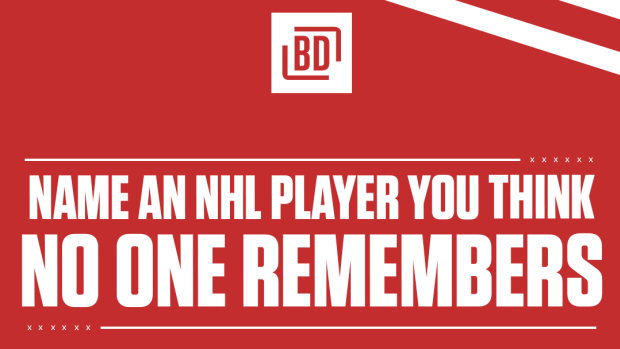 NAME AN NHL PLAYER YOU THINK NO ONE REMEMBERS

Listen, in the annals of hockey history, there have been a metric ton of folks. Some of them are Wayne Gretzky, or Alex Ovechkin, or Sidney Crosby — we know those guys.

Some of them are a little (or a lot) more anonymous. Well, they can’t all be all-timers.

We asked you guys to dig deeps into the banks of your trivia knowledge for some NHL names of the past that you thought no one remembers, and you did not disappoint. This would be a pretty strong trip down memory lane, except for the fact that we’d be lying if we claimed to remember all of these guys.

Name an NHL player you think NO ONE remembers😏

Just like in a BarDown quiz, the word ‘legend’ has never been thrown around so loosely as it has in the replies to this tweet. Great hair on this dude, though.

How could we forget the first Japanese player to play in a NHL game?!

This guy REALLY knew how to chuck knucks.

Robert Kron and Bob Errey. Unless you played NHL '93, then they were awesome.

We’re getting into EBUG territory!

Martin Brochu, 9 NHL games, 0 wins... dressed in 6 of those games for @Canucks

I trick or treated at Tom Fergus’ house once.