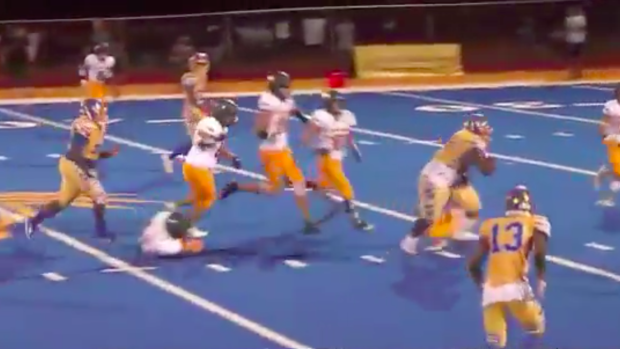 In the expansive world of high school football, there’s occasionally the sort of thing that will completely blow your mind.

Here’s a good example: Howard Brown, who plays for Lincoln College Prep and has commited to Iowa State, is a 6’2, 280lb unit of a football player. He plays quarterback as well as defensive tackle for his team, which, we think, might be the first QB/D-line hybrid that we’ve ever seen.

Just look at his highlights. We promise you, there’s no greater joy than watching someone who literally has a body for the trenches go on and take it himself, shedding tackles and romping his way up the field.

Committed to @CycloneFB, Brown has thrown for over 6,000 yards and 82 TDs 😲pic.twitter.com/Zobk7eRuME

That’s almost 300 pounds coming your way on the QB sneak. “Sneak” has never been less literal.

Although it appears that Brown has committed to Iowa State as a 3-star defensive tackle, his QB skills are no joke. Here’s a mixtape of his passing highlights that we found, and you can see that he’s got an absolute cannon of an arm.