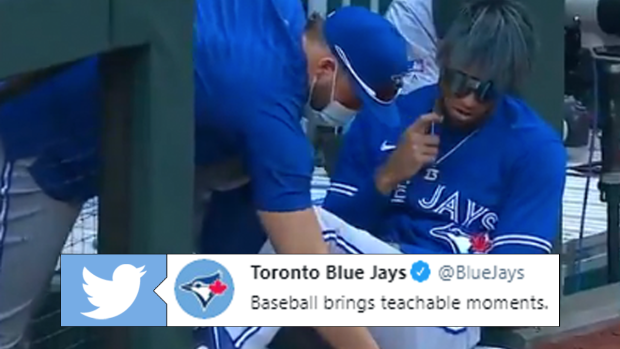 The Toronto Blue Jays enjoyed a nice afternoon on Monday when they piled up a 6-2 victory over the Texas Rangers. To make the victory even sweeter, they were able to pull it off without star batters George Spinger and Lourdes Gurriel Jr.

Springer continues to rehab from an oblique injury, which is what kept him watching from the dugout against the Rangers. Gurriel, on the other hand, was just getting a day of rest. The Jays have been clear that they expect to rest all their stars throughout the year.

While they weren’t present in the lineup, they still made an appearance on the broadcast when they were seen seemingly drawing pictures in the dirt.

Two days later, we’ve found out what it was that was happening in that moment. Apparently it was actually a little geography lesson for Gurriel, who was confused about where the state of Arkansas – where teammate Jonathan Davis is from – was located.

While we have yet to see Springer on the field for the Jays this regular season, he’s definitely taking on a leadership role in terms of geography! And that’s what really counts, right?

My geography needs some work too - how do I get a lesson?

I thought he was writing out Let’s Go Blue Jays, but I guess a geography lesson is ok too.