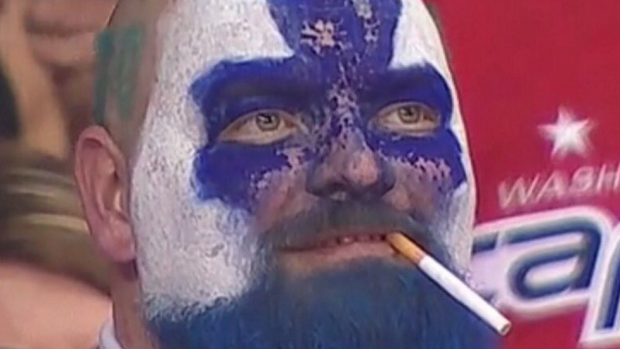 Saturday night, Jason Maslakow needed a cigarette. In fact, he needed a couple, but the one we’re interested in is the one that turned him into a cult hero for hopeful Leafs fans.

When you’re a cool dude supporting his team on the road pic.twitter.com/xZZ8lWJFAt

This picture went viral overnight as people became obsessed with the man now dubbed “Dart Guy”. This picture not only turned him into a rally symbol, but he became the foundation of memes across the internet and even got tickets to Monday night’s playoff game.

We caught up with Maslakow and he told us about how he got the tickets for Monday night:

“The Leafs contacted me via Twitter and they’re going to have two tickets waiting for me.”

He accepted the tickets from the team, but his companionship was a hot commodity in the Greater Toronto Area. Maslakow told us that he was invited to watch the game in Milos Raonic’s box and he was invited on Twitter by Toronto radio host John Derringer earlier in the day.

So, he’ll be at Game 3, with his face painted, because “At this point, I pretty much have to”.

He expects to be busy at the game, so we’re sure you’ll see some of him. Of course, he’ll have his cigarettes at the game too, but he won’t have the cigarette. The cigarette that gave him his niche fame, the cigarette in the picture above, is long gone.

“It got lit the minute I walked out of the arena.”

It could have been an interesting piece of Leafs memorabilia, but now it’s gone forever.

He had a couple smoke breaks in intermissions throughout the game, but for Maslakow and his friends who drove all the way from Waterloo to Washington, doing something like that wouldn’t be worth getting kicked out of the game.

After all, he’s here for the games. He bleeds blue and white and he’ll be cheering loud at as many games as he can get tickets to. Hopefully, those ticket offers will keep on coming and he’ll get to attend Game 4 and any other games the Leafs play at home.

In the meantime, he’ll just keep enjoying the memes. He’s been enjoying them all, but he told us these are some of his favourites so far.

He also made sure to point out how great the crowds in Washington were and expects the ACC to step their game up tomorrow. He finds it can be hard to get people on board with “Go Leafs Go” chants, but he’ll “definitely be trying tomorrow”.