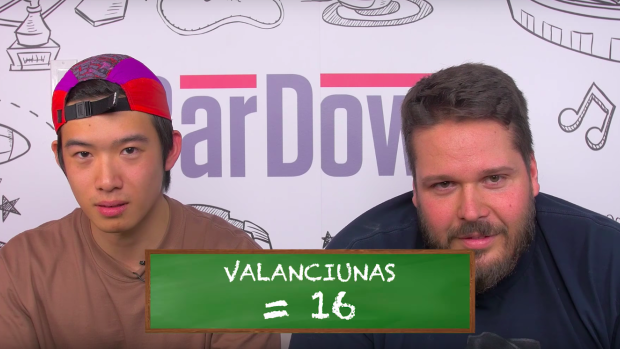 If you’ve watched our latest NBA A-Z Quiz, then — spoiler alert! — you’ll know that it came down to a tiebreaker, decided between Kevin and Hein’s best guesses at the player surname with the higher Scrabble score.

Going with Antetokounmpo for 21 points (an eye chart of vowels, according to Hein), Kevin was able to win his first quiz championship, beating out Hein’s choices of Valanciunas for 16 points.

It turns out that... both of those names would actually have been pretty easy to beat, if you trawled through the annals of NBA history for longer last names. Although, to be fair, one of the best players in the game as well as a beloved former Raptor obviously come to mind first under a time limit!

Going through some of the longest names in NBA history, we found many that beat out Antetokounmpo, and even a few that passed the 30-point threshold. Of course, the hyphenated names reign supreme here. (Anyone remember Jakob Forsbacka-Karlsson from the NHL A-Z quiz?)

Shai Gilgeous-Alexander, one of the best Canadians in the game, clocks in with 27 points with the longest last name in NBA history, and his cousin Nickeil Alexander-Walker actually has him beat at 30 points.

Guess who edges him out? None other than a current Toronto Raptor: Rondae Hollis-Jefferson, good for 31 points! Even Forsbacka-Karlsson is only worth 32 points (“only”), and that’s a real monster of a surname, so that puts Hollis-Jefferson in real good company.

Listen, hindsight is 20/20, but with the benefit of hindsight, it sure looks like Kevin and Hein could’ve come up with better names than Antetokounmpo and Valanciunas in that tiebreaker.​