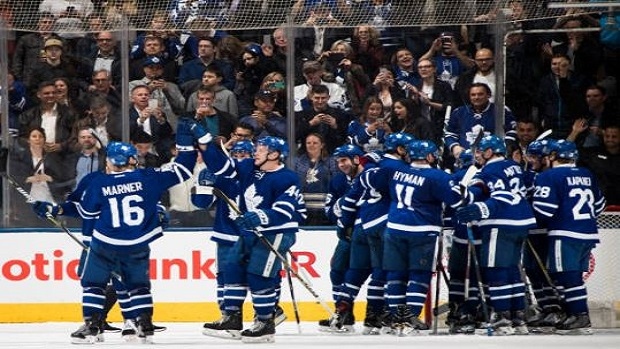 The Toronto Maple Leafs clinched a playoff berth on Saturday night for the first time since the 2012-13 season.

The #MapleLeafs are in! The @mapleleafs clinch a playoff berth after defeating the Pittsburgh Penguins 5-3!

While Leaf fans are pretty excited to see some playoff hockey in Toronto again, the reality starts to sink in that, well, they live in Toronto, one of the most expensive sports cities in the world.

It’s no surprise that the price of Leaf tickets during the regular season are through the roof on most nights, and that number is only going to double, maybe even triple in the next coming days, as they find out their playoff schedule.

Tickets are already being resold on sites like StubHub, and they’re already going for a ridiculous starting price.

For the team’s first home game in the opening round, tickets are starting at $500.00 USD, double the price of any game listed on the road for the series.

As for the higher priced tickets available for Game 1, the asking price might make you sick to your stomach.

The prices for the games in Toronto are pretty consistent for the opening series, but if the team makes it past the first round, some people are going to make some serious loot.

If you want to sit in the worst seat possible, you’re looking at shelling out around $1,000 CAD. If you want to have a decent seat to the game, you might need to head to the bank and apply for a loan.

As expected, the Conference Finals gets pretty expensive, as well.

If the team finds a way to make it all the way to the Stanley Cup this year, the asking price for tickets is going to be absolutely ridiculous.

Again, if you want a better seat, expect to pay a lot more than that.