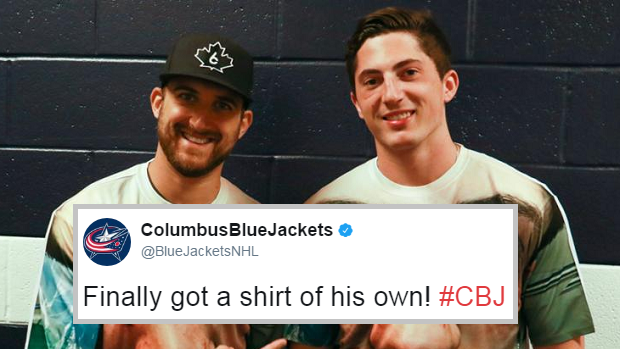 That is the caption of the photo below in which Werenski posed with Blue Jackets’ captain Nick Foligno wearing shirts covered by the photo of his black eye from this year’s playoffs. The shirt was originally worn by a Blue Jackets fan to one of the Jackets’ playoff games and Werenski took notice by sending the fan some free memorabilia.

Well, apparently the experience got Werenski some gear too, as he posted this photo yesterday.

Finally got a shirt of his own! #CBJ pic.twitter.com/jBdKirujHm

One thing we have to say is, Zach, with the way you played last season, you’ll be on T-shirts for a long time and you don’t need a photo of your face for those ones.

We’re sure Werenski jerseys and shirseys will be packing Nationwide Arena for years to come.