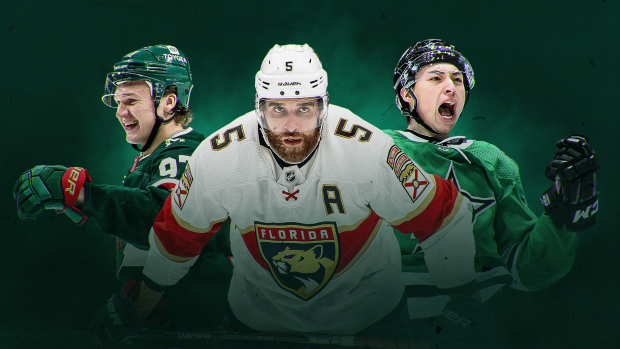 We're a little more than halfway through the NHL season and there are a ton of players putting up some pretty insane numbers, so much so to the point where guys are already setting career-highs for points in a season.

The list of players who have already set a career-high in points this season is long, but we wanted to highlight 10 of the bigger names that have done it at the just over halfway point of the season, so here we go!

In a contract year, Nazem Kadri is ensuring not only that he's going to get PAIDDDD this summer, but that he'll be in the conversation for some hardware come season's end thanks to 63 points in 46 games.

Kadri's previous career-high in points was 61 and when the season is over, the number could be 100 or better.

'Kirill The Thrill's' rookie season was impressive and he's following it up with a career-year (no surprise).  Kaprizov has 61 points in 45 games, which puts him in contention for the Art Ross.  It also means he's two points away from setting a career-high for points in a season if you include his time in the KHL.

Jason Robertson (20-24—44 in 37 GP) scored the overtime winner and reached the 20-goal mark in a campaign for the first time in his NHL career. He finished last season with 17 (51 GP).#NHLStats: https://t.co/PnAyYnlVZR pic.twitter.com/F1F7AKe7wJ

Yes, Jason Robertson's only in his second season so it was inevitable that he was going to surpass his 45-point rookie season total, but the fact that he's done it in just 40 games is incredibly impressive for a second-round pick who didn't have the same pedigree as say, his brother Nick.

Robertson has also scored 21 goals, which is a new career-best.  The Stars got a really good one.

We're still sleeping on Aaron Ekblad, right?  The first overall pick in 2014 hasn't surpassed 50 points since his final year of junior hockey with the Barrie Colts, but he's just 5 points away from doing that this season with 45 in 48 games.

Ekblad's previous best was 41 in 2019/20, but what's impressive with him when you look at his numbers is that he's scored double digit goals in 7 of his 8 seasons in the NHL and is 5 tallies away from a new career-best in that department.

Nico has five goals in his past four games.

He's got 13 goals this season, one off Jesper Bratt's team-leading 14.

Guess what round Jesper Bratt was drafted in.  If you said 5th or earlier, you're wrong.  A 6th-round selection in 2016, Bratt has posted 30 or more points in every season and this year, he's taken his game to another level with 43 points in 45 games, which is 8 more than his previous career-high.

At just 23-years-old, Bratt has the Devils' future looking even brighter.

Kyrou extends his team-lead in goals to 18.

Schenn picks up his seconds assist, as he continues to play well after the injury.

Now 5-1, so we got our answer on the third-period killer instinct. #stlblues

Kyrou has built on an impressive 35-point campaign last season with career-highs across the board (18-25-43) and he's a big reason why the Blues have been so successful this season.

NHL cost per goal leaders this season via @CapFriendly:

Troy Terry was a 5th-round pick in 2015, but had some legendary World Juniors moments that made many believe he could be a productive player in the NHL.  It's taken some time for him to get to that point, but this season has been the 24-year-old's best season with 25 goals and 42 points, which shatters his previous career-high of 20 points last season.

This is the first time Chandler Stephenson will be used as a winger for VGK since Game 2 of the series against Chicago in the Bubble.

He played with Karlsson and Stone in that game and each of the three round-robin games.

So...if I asked you who's leading the Vegas Golden Knights in points this season, you probably wouldn't say Chandler Stephenson, which means you'd also be wrong.

The 27-year-old was drafted in 2012, but has been so impactful for Vegas with his blazing speed, and with 38 points this season he's well on his way to a potential 60-point season.  Not bad for a guy making 2.75 million for the next two seasons after this one.

Devon Toews is indeed the elite #1 the stats said he was when the Avalanche traded for him. Model is giving the offensive credit to Makar so far this season but wouldn't be surprised to see that work itself out in the 2nd half.

When you think of Avalanche defenceman, Cale Makar is the first name that comes to mind, especially when we're talking about points.  But his D-partner Devon Toews has been just as good this season, and even though the production isn't up with Cale, it's still really good.

Toews is almost averaging a point per game with 36 in 38 games and he's two away from the most goals he's had in a season since he was playing in the BCHL in 2012/13.

"I think some people get surprised, ‘Oh look at the year he’s having.’ It doesn’t surprise me at all. That kid just works his butt off, nonstop every night."

Andrew Mangiapane's stat-line is incredible.  25 goals, 8 assists, and a career-high 33 points.  The guy just scores goals, can't argue with that.