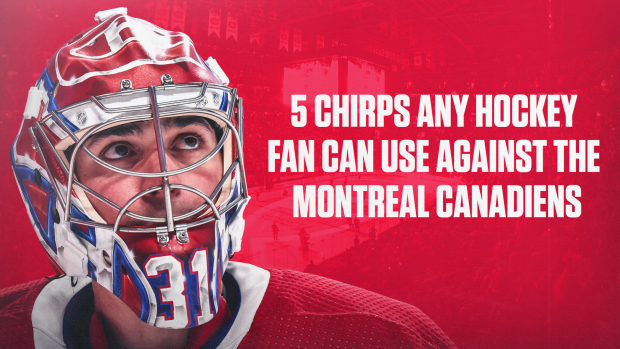 The best chirps to use against the Habs

Ahh, the Kings of the Cup.

There’s something about the Habs that make it so easy for everyone to hate. With that said,  they’re slowly starting to make a name for themselves again. They kicked the Pittsburgh Penguins out of the qualifying round of playoffs in 2020 and they came into the 2021 season HOT.

While they have a pretty good chance at making the playoffs for the second year in a row (yes, it is surprising) that doesn’t mean they’ve earned the rest of the NHL’s respect yet.

Here are five chirps that anyone can use against the Montreal Canadiens.

1. “Their logos are toilet seats”

Yes, a classic. The most iconic and number one go-to chirp for Habs fans has to be the resemblance between the Canadiens logo and a toilet seat.

😂🤣 #ToiletSeat #Habs #Sabres #LeafsForever Things must be real bad in Buffalo that this guy agreed to wear a toilet seat around his neck. https://t.co/5oyAQhOvU5 pic.twitter.com/eYTxIyu0hU

2. “The Habs can’t focus on winning because they’re too focused on the good old days”

The Canadiens hold the title for most Stanley cups in the league with a total of 24 championships under their belt. It’s definitely something to be proud of to this day! Too bad the last time they lifted the cup was in 1993. It really doesn’t matter if you’ve won the Stanley Cup more than any other team if the last time you held it was 28 years ago. The past is the past.

Carey Price is either the best goalie in the NHL or one of the worst, there’s no in between. However, it’s easier to talk about the negatives more than the positives! His bad games are perfect ammo to use!

Carey Price doesn’t look like himself at all! pic.twitter.com/igteiLqLoc

4. “The Habs suck in English and French”

Montreal is a French-English speaking city. The Canadiens are the only team in the NHL built to cater to the French. Since they can speak in two languages, it’s only fair if they slack in two as well.

5. “Their GM is the most jacked person on the team”

While bigger isn't always better, on paper the Canadiens have one of the smaller rosters in the league. On the other hand, their GM Marc Bergevin has plenty of muscle to go around for them to borrow.

THREAD 1/I've loved every single move Marc Bergevin has made this offseason. Not just the professional but the personal; grow out the lettuce & get jacked as hell, nice. #NHL #Habs #GoHabsGo pic.twitter.com/xPdYHtbE4y