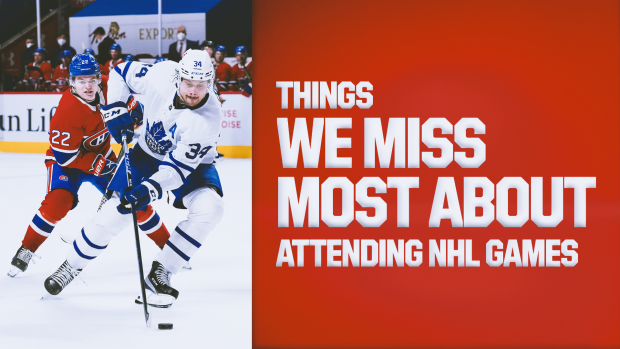 Things we miss the most about attending NHL games

While some NHL teams have slowly started to bring back fans in the arena, every NHL team in the North Division went the entire regular season without fans in their barn.

We never thought we would have to go one FULL season without watching our favourite players up close and personal.

At the end of the day, we’re thankful we even got an NHL season this year with a pandemic still going on but that doesn’t make us miss attending live games any less.

Here are five things we reminisce about from the good ol days.

One of the best things about live games is that almost everyone shares one thing in common: the love for one team. If the game is at home there’s a good chance that everyone around you will be cheering for the same team. There’s truly nothing like celebrating with the people beside you when your team scores!

Being a part of the atmosphere at an NHL game is an experience like no other. The amount of energy you can physically feel from thousands of people cheering at the same time is truly special.

This one might go without saying but simply watching hockey in person is an entirely different game then watching it on TV. We’ll take seeing the entire ice live over close ups and different camera angles any day! Hearing things as little as skates cutting into the ice is honestly beautiful.

We all get a little frustrated sometimes. Whether it’s the ref making a bad call or the other team laying a dirty hit, it’s going to happen. Yes, we know the ref can’t actually hear us telling them off but it’s either that or the TV screen!

Yes, we know, hockey arena food is the same type of food you can get at the closest mall near you and triple the price. With that said, there’s something about having pizza with your friends while watching your favourite team that just tastes BETTER than any other pizza on the planet. Yes, we may have dropped $24 dollars for one slice but who cares! It’s a must.