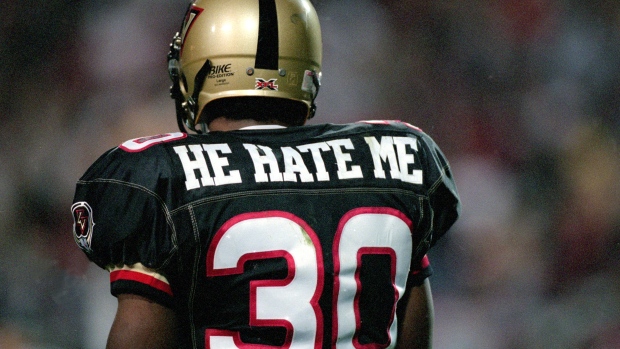 The XFL is reportedly making a comeback and so far the general consensus from sports fans online seems be that people would like to see Vince McMahon give football the WWE treatment for a second time.

It's hard to believe, but it's already been nearly 17 years since the XFL officially ceased to exist back in 2001. The product of a relationship between the WWE and American broadcasting giant NBC, the XFL captured the attention of North American audiences when it first launched, with its "extreme" approach to the gridiron, but failed to maintain viewer interest, folding after the very first season.

The XFL wasn't your everyday football league, which while intriguing at first, was ultimately the very reason why viewership took a nosedive early on. The presentation was different, the rules were different, the play on the field was different. Here are eight amazing facts about the XFL that made it one of the most infamous sports leagues in history.

There was no coin-toss, two players sprinted towards a ball to determine possession

Why leave things to chance? In lieu of having a coin toss, the XFL began with a "scramble" which involved one player from each team sprinting towards a ball located at the halfway line and diving on top of it in an attempt to gain possession. Win the scramble, decide who keeps the ball.

One of the XFL's lasting signatures was its iconic black and red football. But there was just one problem with the ball's new colourway and water repelling design: the dye made the ball slippery when it got wet, making it difficult to hold onto. You can see how that would be a problem in football. The solution was even more outlandish than the problem. The commissioner, Basil DeVito, ultimately resolved the issue in his own basement by rubbing the ball down with sandpaper.

They had cameramen on the field in hockey equipment

For broadcasters it's all about getting fans closer to the game. As with most of what they did, the XFL took this to the extreme, situating a camerman, called a Bubba cam, on the field in a full set of of protective gear, including a hockey helmet. Sometimes the camerman got a little too close to the action, leading to some spectacular collisions. It was ambitious, but much like the rest of the XFL's presentation, the final product was a bit rough.

You know how the NBA and the MLB have recently held special nickname-themed nights that allowed players to put whatever name they wanted on the back of their jerseys? The XFL allowed players to do that whenever they wanted. This led to another one of the XFL's hallmark moments...He Hate Me. Las Vegas Outlaws running back Rod Smart wore the nickname on the back of his jersey in the team's very first game and instantly became one of the league's most memorable players.

There was no fair catch rule

Just like how some people who play Madden completely ignore the fair catch rule, so did players in the XFL. Except in the XFL it was actually legal to do so since they didn't actually have a fair catch rule. Skip to 0:55 in the video below to see just how devastating those hits could be.

They directly promoted the violent nature of football

While football leagues steer clear of directly promoting violent plays on the field and treats the gridiron as if it were a gentleman's game, the XFL went out of their way to highlight violent plays. Check out this montage for "hit of the year" which includes soundbites of the play-by-play announcers mentioning player injuries that stemmed from heavy hits.

Teams weren't allowed to kick an extra-point, they had to run a play

Extra-points are somewhat automatic in football, but not in the XFL. Oh, no, no. Rather than allow teams to kick an extra-point attempt after scoring a touchdown, teams in the XFL had to run a play from the 1 yard line to earn the extra point. Among the many mid-season rule changes, they later introduced a two (5 yards back) and three (10 yards back) point play.

They had the most bizarre half-time show involving their cheerleaders

Professional sports leagues try to provide their fans with as much behind-the-scenes access as possible, and the XFL was no different. Well, actually, they were totally different. In one of their most talked about stunts, Vince had a cameraman go into the cheerleader's locker room to see what they were up to at half-time. The result was this sketch that looks like it was taken directly from an edition of Monday Night Raw.