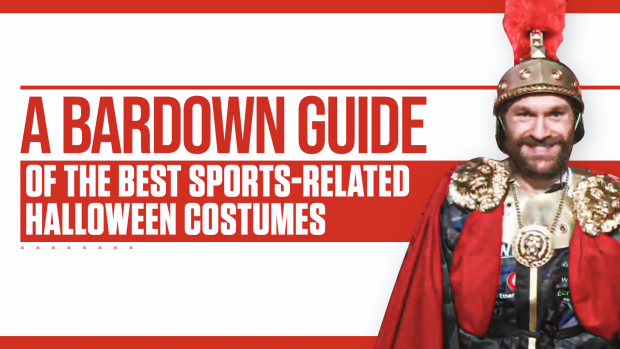 No, not the end of the baseball season being just around the corner, we’re talking about Halloween!

And with the colours changing season, the NFL season already being in Week 6, and the 2021-2022 NHL and NBA seasons starting back up, it’s hard to not get into the festive spirit!

So we at BarDown thought how else to channel our Halloween spirit than to come up with some stellar costumes for you’s to wow your friends with! 2021 has given us some pretty awesome sports moments, which inherently included a few iconic looks, so without further ado, let’s get into it.

We’re starting off with a bang here folks. What better way to make an absolute statement at your Halloween plans this year than to be the goat soaking up his 7th Super Bowl ring in Sunny Florida? This is also a pretty easy last-minute look to pull together too, just pull out the orange shirt, a basic pair of black sunglasses and a black backwards cap and you’re ready to PARTY. An optional choice is to carry around a fake Lombardi trophy and toss it around like it’s nobody’s business.

Tom Brady on land after the Bucs' boat parade 🚶‍♂️

Okay, we know it’s a bit early with this one but if there’s any time of year you’re going to dress up like a spartan, you may as well do it for Halloween with some personal touches to make you stand out. Pretty basic costume with this one, just buy any basic spartan costume, get yourself a pair of boxing gloves along with a heavyweight belt and you are set to be the Gypsy King for one night! Though we cannot confirm that you’ll also have the voice of an angel if you decide to bust out singing Walking in Memphis.

TYSON FURY WALK OUT TO THE SONG AC DC pic.twitter.com/sj4h8yJ9QX

It's not a @Tyson_Fury victory until he serenades us 😅 pic.twitter.com/q07DWf8rmt

When thinking of a pretty sick Halloween costume, it’s hard to not pay homage to BarDown’s very own Jeff aka, Dude with Sports Sign! You can totally use this moment to come up with your own hot take or simply get something off your chest about your favourite team! Just grab a jersey, a nice piece of cardboard and a sharpie to write your heart’s desire!

If there is an iconic hockey moment from this past year, it definitely has to be all the chaos that was instilled at Lake Tahoe. So when Pasta was absolutely distraught that he was not able to be in the Bruins locker room to celebrate their 7-3 victory over the Flyers, he probably wasn’t aware he was going to be an absolute vibe for the 2021 Halloween season. Just grab your hockey gear, toss on a Bruins jersey, rock a backwards cap and a slick pair of pink Pit Vipers and you’re reading to rock the town. All you need next is to request Barbie Girl wherever you decide to celebrate the scariest night of the year!

"So I missed the 'Barbie Girl' song. Who knows what's going to be on when I come back?" - Pasta 🍝 pic.twitter.com/WLMoynpUOv https://t.co/skxMEd04Xv

Talking about scary, throwback to when games at Lake Tahoe had to pause for eight hours because of the sun melting the ice! If there was one team though that was ready to take on the winter weather, it was the Bruins and their retro snow gear! For this look, you can pull off a pretty standard bright-coloured snowsuit and tie some Bruins-related gear into the mix, or you can simply rock the Patrice Bergeron look and rock the Bruins vintage tee, neon windbreaker, metallic fanny pack and cassette player to really nail this costume down.

Bergeron confirms he had a working Walkman and was playing Dr. Dre on Sunday.

"Unfortunately, it stopped working right as I got off the bus." pic.twitter.com/xyCUH6JlRl

Foodies, get ready because it is time to absolutely steal the show just like our boy Joey Chestnut does year after year. Sure you can dress up as a pretty recognizable GOAT like Tom Brady, or you can mix things up and honour one of the most interesting people on the planet. For this costume, you can find a Nathan’s Hot Dog Eating Contest shirt, yield around a heavyweight belt similar to our Tyson Fury costume, while additionally opting to eat hot dogs all night. What better costume incorporates food, you’re set up for greatness with this killer combo!

Let’s say you want to rock a sports-related costume this year but are undecided. What better way to tap into that indecisiveness than to be 80’s heartthrob Rob Lowe attending sporting events and not knowing what team to cheer for! Truly, what better way to rock a sports fit than to be a generic fan. You can tap into NFL-Rob Lowe and wear an NFL cap along with a nice trench coat or you can wear your favourite tropical shirt and wear an MLB cap! Regardless of which option you go with, we just hope you have fun!

Rob Lowe can’t keep getting away with wearing these hats 😫

If you’re in the winning spirit, then who better to dress up as than the Canadian women who absolutely killed it on the national level and brought home gold in both soccer and hockey! Whether you have a Team Canada jersey or you simply have any Canadian gear, pair that with a gold medal you can find online or at any party store and you’re set! Just don’t party too hard or you’ll have to opt for a stretcher for the Blayre Turnbull look!

If you’re in the mood to continue to celebrate Tampa Bay, then look no further as Pat Maroon gave us some pretty awesome costume potential at this year’s Stanley Cup Parade. Just grab your best fedora, some killer shades, a Stanley Cup flag to hang around your neck and have everyone call you Big Rig and you are set for the night! This also could totally be a sick group costume if one person rocks Maroon’s look and another goes as Super Bowl Parade Tom Brady!

If you’re a Canadian baseball fan, then odds are you may opt to dress as Bo Bichette of Vladimir Guerrero Jr. Don’t get us wrong, both are pretty solid costumes but if you want to stand out amongst the rest, then let us propose you go as Canadian Baseball Hall of Famer, Larry Walker. There honestly may not be a single thing more iconic than wearing a NASCAR Spongebob Square Pants shirt that reads “Ain’t No Ordinary Sponge” to do Hall of Fame interviews. Though you may not be able to find Walkers’ exact button-up, there are a few awesome shirts with similar sayings and all you need after that is a solid trucker hat and you’re ready for the night!

How it started vs. how it's going for @baseballhall inductee Larry Walker. pic.twitter.com/3IpKx2lBX7

Basketball fans, don’t think we forgot about you! There are some pretty awesome pregame basketball outfits you could replicate at your Halloween parties this year, but one iconic look that stands out is from this year’s March Madness tournament. If there’s one player that stood out beyond his skill, it definitely was Drew Timme. Truly, are you kidding, look at the stache on the kid! This guy gives off strong Semi-Pro vibes, so fellas. Shave the stache into an iconic handlebar look, rock a headband and a basketball jersey and shorts and you are SET.

Did Gonzaga's Drew Timme beat the rest of these guys for the best stache ever? 🤔👇

Well, there you have it! Though we’re positive there are a ton more iconic Halloween costume looks you could rock from the sports world this past year, here are just a few to help you narrow down your search (if not, may we suggest yet again the Rob Lowe costume?).