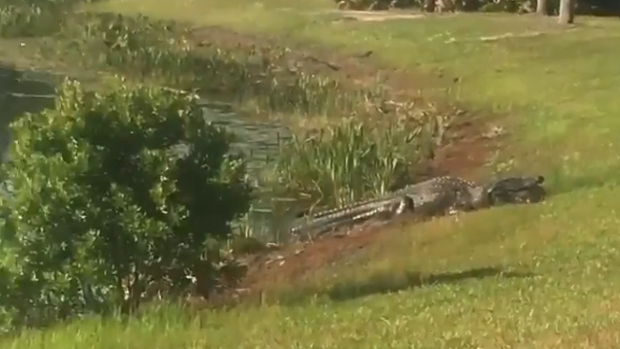 An Alligator is caught eating a turtle during a round of golf. , Lauren Thompson/Twitter

A day on the golf course typically entails good weather, friends, and the occasional bevie. But in Florida, it apparently also includes alligators eating turtles.

Lauren Thompson, the co-host of Golf Channel’s Morning Drive was playing a round at Orlando’s Ritz Carlton Grande Lakes when she noticed a massive creature on the course. She took out her phone to film the action, only to realize the gator had a large turtle locked between its jaws.

Ummm...🐊 (I mean, we did need a fourth, right @LawsonHovey?) pic.twitter.com/pniLz5XmTm

Ritz Carlton Grande Lakes...love that course...AND all the wildlife https://t.co/OuWXVt3vIq

This wasn’t the first animal that was caught on a Florida golf course in action either. This past January, Dr. Richard Nadler caught a Burmese Python and alligator going at it. The gator appeared to come out on top of what had the look of an intense battle.

Can we also agree that the golfers were a little too close to the action? 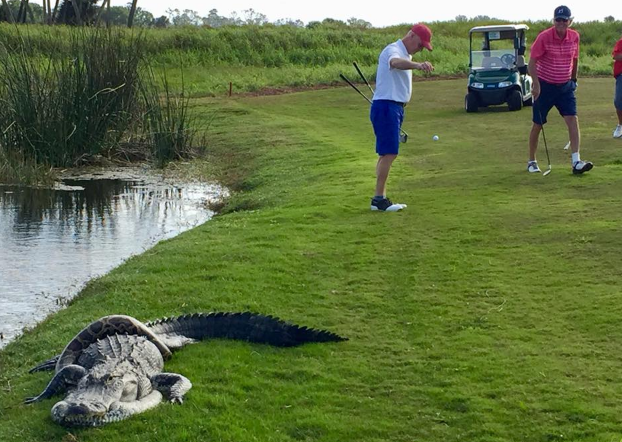 If you still have the courage to hit the greens in Florida after seeing this footage, make sure you keep an eye out for any alligators. It wouldn’t exactly be unusual.