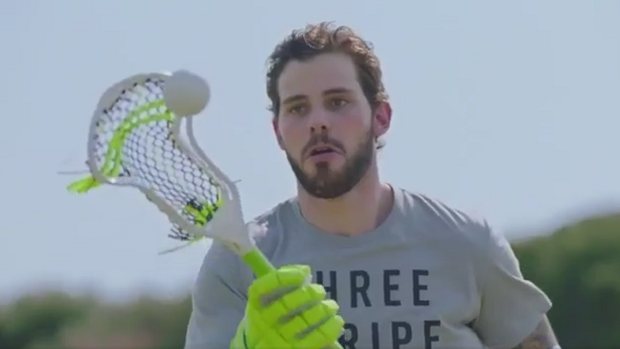 Tyler Seguin’s skills on the ice weren’t the only path to an athletic lifestyle – he may have had a career in lacrosse if things hadn’t worked out so well.

Of course, he made the right decision – he’s a Stanley Cup champion, he’s one of only three players to put up 70 points in each of the last four seasons (Sidney Crosby and Nicklas Backstrom are the others). Still, even when in the NHL he’s still thinking about Lacrosse. In 2010, after he had been drafted by the Boston Bruins he told a Massachusetts newspaper that he “[Missed] lacrosse like crazy”.

He stopped playing the sport four years before his draft season – at least in an organized fashion.

As Jordie of Barstool Sports pointed out in a recent blogpost, Seguin has been repping Lax hard recently. It all started a couple weeks back when Adidas released a commercial highlighting NHL players that receive inspiration from avenues other than hockey.

Then today, he posted this image of his closet, which features a lax stick in the back right corner.

The reason he stopped playing lacrosse in the first place was to focus on hockey. It is a common event in many professional athletes lives, because most played several sports growing up. Seguin says the day came when he was 14 years old and he had to choose which sport he wanted to play for “The rest of [his] life”. He then elaborated on what the sport means to him:

Well, he’s not always looking at their stats. In a popular interview he did with Jamie Benn a couple of years back, we reiterates that if he were not playing hockey, he would be playing lacrosse. However, when pressed to name a lacrosse player by his long-time linemate, a name doesn’t come up right away.

Still, watch it or not, you can clearly see that Seguin thinks about Lacrosse on a regular basis. John Tavares, who Seguin mentions in the interview above (And his uncle – also named John Tavares), is also a popular player who has been known to be an avid lacrosse player in the NHL.