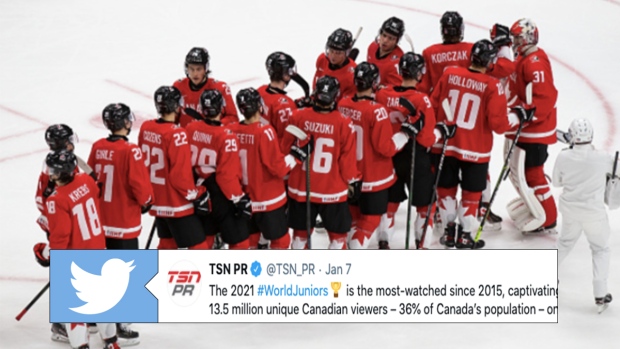 This year’s World Juniors might not have ended the way that most Canadian fans hoped, but they supported their team right to the very end.

The Team Canada we saw this year that bulldozed its way to the Gold medal game versus the USA might go down as one of the best World Junior teams on paper of all time, but they weren’t able to secure the first place finish that they sought out for.

No matter the outcome, though, the World Juniors is a Canadian holiday classic. There was some amazing hockey to be watched along the way, and it seems like Canadian fans ate up every second of it.

As the numbers show, Canadians definitely love their hockey.

The 2021 #WorldJuniors is the most-watched since 2015, captivating 13.5 million unique Canadian viewers – 36% of Canada’s population – on @TSN_Sports and @RDSca. pic.twitter.com/LUEfxR6vv1

An average audience of nearly 3.8 million viewers tuned in to @TSN_Sports and @RDSca for the Gold Medal Game, which also became the most-streamed event ever for TSN digital platforms (up 87% vs 2020).

These numbers are WILD.

To put it into context: last year, about 84 million Americans watched the Super Bowl out of their population of 328.2 million, which is about 25%. Americans love their football, right?