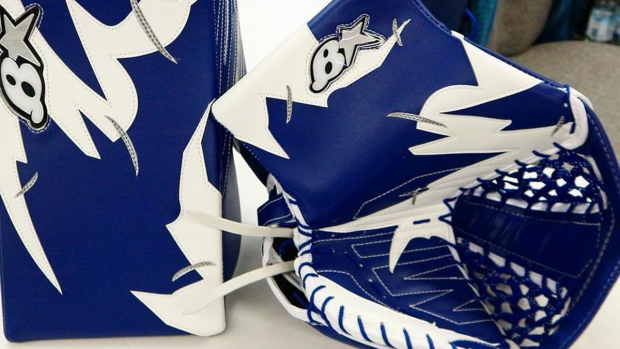 Some goalies toss on some rubber-stained plain pads and take the crease without a second though. To them, style doesn’t matter as long as they’re keeping pucks out of the net.

For others, style is very important. Aaron Dell likely slides into that category, because he seems to always bring the heat with his setup.

According to Brian’s Custom Sports, a company dedicated to creating goalie gear, Aaron Dell’s new setup are these busy, yet slick, Leafs-themed pads.

Aaron Dell may be the Leafs' third goalie, but his pad set-up is easily the prettiest in the organization. Nice to see he's continuing to use the "Scarecrow from Batman" motifs he adopted in San Jose pic.twitter.com/gNwU5aYr6r

The sum of each of its parts, every pad setup should look best when all put together. That could not be more true for Dell’s new setup – titled “Scarecrow” – as each piece combines to make the larger design jaw dropping.

Aaron Dell’s stealth mode pads are out of this world. 🚀🔥🚨
.
📸: @ADell32 /IG pic.twitter.com/gygDmfLdjw

Aaron Dell of the @SanJoseSharks stopped all 21 shots he faced to earn his first career NHL shutout. pic.twitter.com/Icj7LJ3vO0