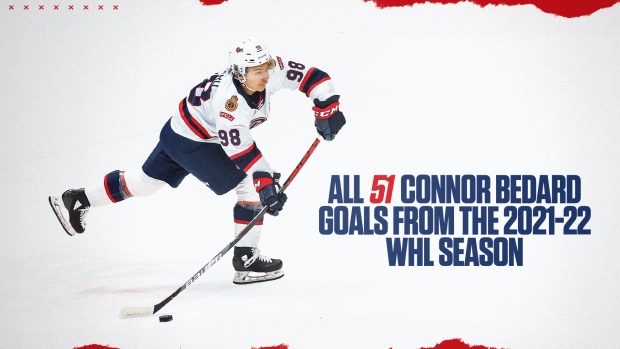 We still can’t confirm if Connor Bedard is in fact human or not, but we can tell you that he hasn’t looked like one lately.

The 16-year-old became the youngest player in WHL history to score 50 goals in a single season on Sunday night after tallying 50 and 51 against the Moose Jaw Warrior. The North Vancouver native also managed to add three assists, bringing his point total to 100 on the season.

Oh- and did we mention this was the final game of the season for the Pats? He absolutely delivered in this one.

There have been so many highlight reel goals from Bedard this season that the CHL said what the heck and decided to put all of them, yes, literally all 51 of them, in a one-minute video. Some excellent work by the CHL’s social team for stitching these together and giving us hockey fans something to drool over the next year until Connor’s drafted into the NHL.

Wow… take another look at 24 if you missed it!

We’ve seen what Connor can do on the ice, but if you’re wondering what he’s like off the ice… check out this video in which he reviewed old hockey sticks. And take a look at those legs!!!!

‘Bedsy’ won’t be competing in this year’s playoffs but he will be on the ice for Canada at this summer’s World Junior Championship. He’ll be drafted into the NHL in 2023, the question is… who’s going to get him?