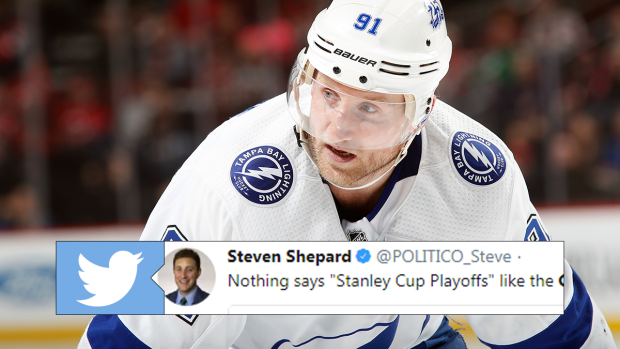 The NHL released the schedule for the first round of the NHL playoffs yesterday and one small part of the plan caught the eye of hockey fans in America.

NBC is the rights holder for the NHL playoffs, so of course, many people expected to primarily watch the games on their main channel. Obviously, not all games received that prime-time treatment, but fans were especially surprised to see two games delegated to a channel that focused on another sport entirely: The Golf Channel.

Game four of the Ducks vs. Sharks series and the Devils vs. Lightning series will both air on the golf channel.

Games 1-4 of the Ducks-Sharks series is on, in order, USA Network, NBCSN, CNBC and the Golf Channel

I don't want to say that the Devils playoff games aren't necessarily a priority for NBC, but Game 4 is going to be shown on...The Golf Channel. I am not kidding.

So the GOLF Channel (?!) gets back-to-back NHL game fours. Here’s what’s airing in those blocks on other channels:

NBC sending a message, I suspect..

Can't wait to watch Game Four of the Ice Hockey Stanley Cup Playoffs between the Anaheim's and the San Jose's on the GOLF CHANNEL!!! 😂 pic.twitter.com/ZuFOc9oVkq

Needless to say, fans were fairly confused about the entire thing.

Others speculated that this could have been retaliation for the NHL not sending their players to the Olympics (Another NBC property), but either way, it’s an odd sight. Of course, if the league decided to broadcast what the teams out of the playoffs were doing, the Golf Channel would make a lot more sense.

And here i thought the Sabres would be the only nhl team on the golf channel this spring pic.twitter.com/0Fzmn0wV57

Remember the whole no NHLers in the Olympics thing? Yeah part of the fall out is NBC sticking 2 Game 4s on Golf Channel. #exposure https://t.co/uW5k8wJUgv