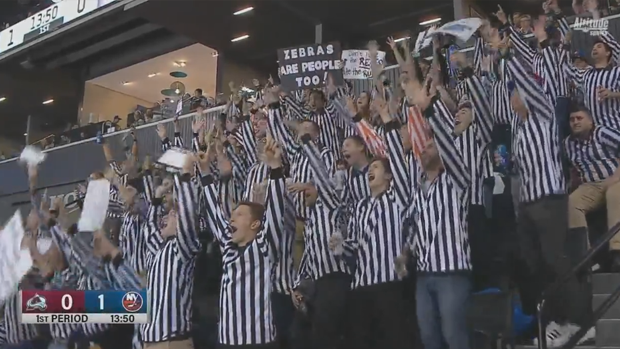 Referees have a tough job. It’s very rare that anybody notices when they make a good call, but anything even slightly off and people jump on them for it.

Well, the referees at the Islanders game tonight got a special treat. Not only did they get to see all the Matt Duchene action first hand, but they had their own personal group of fans. An entire section of fans at the Barclays Center dressed up as referees and they cheered basically any time the referees blew the whistle.

"Let's go refs!" 🤣😂 . This section of fans at the Barclays Center was cheering on the refs at tonight's Isles/Avs game. . (Via: YouTube/Neothylacine X)

A section of fans here dressed in refs jerseys and wildly cheering refs after every whistle pic.twitter.com/BTcce2Oh8B

i’m losing my mind at these ‘refs fans’ at the avs/islanders game pic.twitter.com/JS1EnAtmr7

Shoutout to the section of people dressed up as referees at the Islanders/Avalanche game 😂: pic.twitter.com/7cnLr8OWHQ

We’re sure the referees have never felt more at home. Maybe the Islanders will start getting a couple calls thrown their way if the fans continue to behave like this.