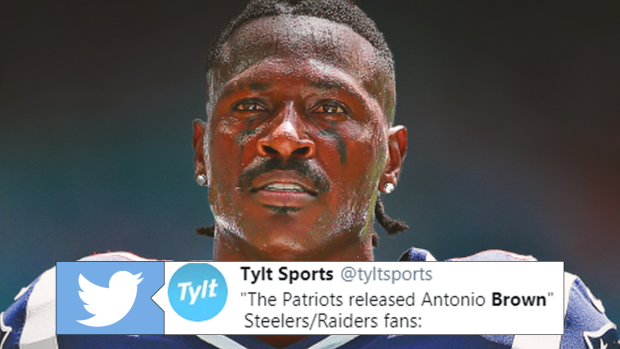 Antonio Brown’s rollercoaster year continues, including a stint with two teams since his time as a Pittsburgh Steeler in which he played a grand total of one regular season NFL game.

When the New England Patriots signed AB just hours after his release from the Oakland Raiders, many thought it was an absolute steal. Unfortunately for the Pats, more off-field issues caught up to Brown and led to his sudden release from the team.

Some may have seen it coming, but it’s hard not to feel shock just from this storyline in general.

How the Patriots did Antonio Brown pic.twitter.com/4qMBNQi3gi

I was sick before and guess what I’m still sick. https://t.co/UviHaJhADd

BREAKING: 🚨 Antonio Brown already has at least 1 team reaching out for his services. pic.twitter.com/eJNsIbPMfl

Will Antonio Brown play another down in the NFL this season?

Antonio Brown every moment of every day pic.twitter.com/uMuqIKrve4

On timing, the #Patriots cut Antonio Brown before having to pay his full signing bonus. Plus, got out of paying him if he winds up on the commissioner’s exempt list. From that perspective, beyond all the obvious, this makes a lot of sense.

What a career! Undefeated as a Raider AND a Patriot. Congratulations, Antonio Brown!

Steelers and Raiders after the Patriots released Antonio Brown pic.twitter.com/dCorNzuPKc

NFL fans when they found out Antonio Brown just got released by the Patriots. 😳😳😳 pic.twitter.com/91RhJdkFi4

So the @Raiders won the trade after all. 🤯

He lasted one off-season with the #Raiders, 11 days on the #Patriots

It was said the Patriots wouldn't have signed him if they knew about his off the field issues, now they cut him before game 2.

That’s what you get for dissing the Raiders homie. #weaksauce pic.twitter.com/Kt9H3ONFet