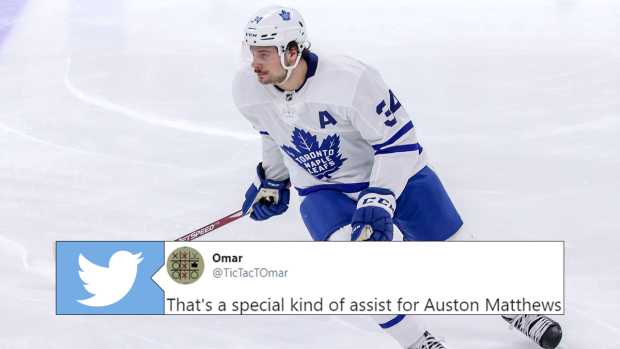 Auston Matthews and the Toronto Maple Leafs had a rough night on Sunday, but even though they surrendered eight goals, there were some bright spots.

Of course, Leafs could find some in the fact after going down 7-1 they managed to still show some fight and bring things back to 8-4. So… they didn’t give up? Well, Leafs fans, we’re going to give you a little more than that because Auston Matthews made a play that may not have shown up on the score sheet, but was still one of the niftier passes we’ve seen this season.

He didn’t even need a puck to make this pass, he was just flipping Morgan Rielly’s stick back to him.

That's a special kind of assist for Auston Matthews pic.twitter.com/41loEyezo2

Matthews isn’t the first one to do this, but doing it without looking definitely makes it unique.

Also, it’s not as easy to do as you might think. Marsh and Melo from TSN 1150 in Hamilton attempted to recreate the move and it… did not go well.

“Anybody can do that Auston Matthews thing from last night” - Nobody#LeafsForever pic.twitter.com/rWTbLqGqCz