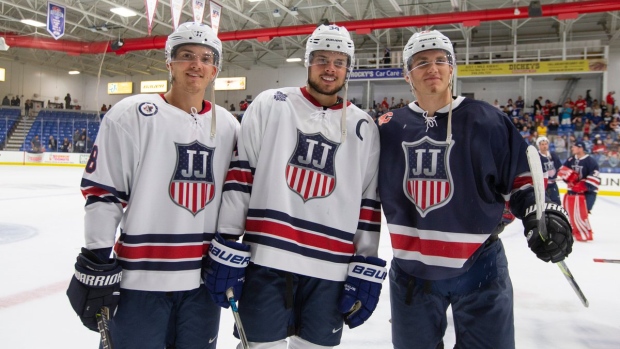 Johannson passed away suddenly at the age of 53 last January as the general manager of the USA men’s Olympic hockey team that competed in PyeongChang 2018, as well as overseeing the development of countless American hockey players during is assistant executive director of operations for USA Hockey.

To show their support of Johansson and his family, some of the best American hockey players were on hand in Plymouth, Michigan, including Chicago Blackhawks forward Patrick Kane and Maple Leafs centre Auston Matthews, who served as honorary captains.

Team Blue defeated Team White 14-9. In the loss, Matthews, playing for Team White, record two goals and two assists, including this beauty of a snipe.

@auston_matthews showed off his world class release during @usahockey’s Stars and Stripes Showdown. ••• (🎥Via: HockeyTech TV)

There aren’t too many players in the game that can get a shot off and pinpoint into the net from that distance like Matthews did there. Matthews took a pass in his legs, coralled it and changed the angle in a split second and went roof daddy, or, "Papi."

Dylan Larkin played a huge role in organizing the event. He scored a nice goal involving a fake clapper before stickhandling and ripping one short side on his forehand past Alex Nedeljkovic.

Game-worn jerseys were auctioned online along with autographed NHL jerseys and memorabilia, raffle draws and a meet-and-greet with the players with proceeds benefitting USA Hockey’s Jim Johannson Legacy Fund as well as the Ellie Johannson College Fund. Johannson’s fund supports the growth of grassroots programs across the United States.

.@Dylanlarkin39 with a message for all those that supported today's Stars & Stripes Showdown. #ForJJ 🇺🇸

More info on how you can help carry on JJ's legacy → https://t.co/b9IjxluP04 pic.twitter.com/SmFtHgAl4r

"I would like to thank everyone for coming to the game and for watching online," said Dylan Larkin. "We need to do our part to continue JJ's legacy and this was a fun way with our busy NHL schedules to do that. It won't be the last time we do a game like this."

You can donate to the legacy fund here: https://t.co/5hWqzVoktE pic.twitter.com/GBww6GHMNi