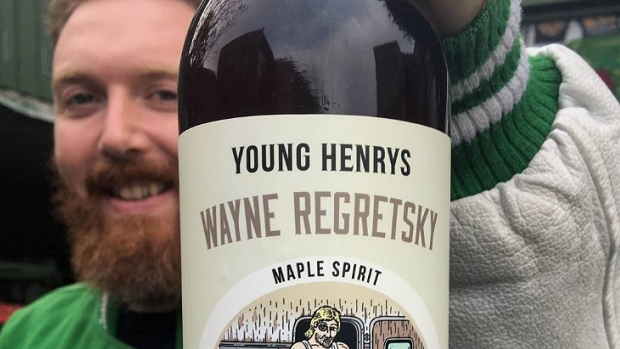 It’s no secret the Commonwealth companionship we share with our good mates from the land down undah.

From student exchanges to politics, Australia and Canada formed a bond dating back to the British Empire. The influx of Canadians and Aussies living in each other’s countries is particularly noteworthy. So it’s only natural that some of our cultural principals are bound to rub off.

Look no further than the good folks at Young Henrys, a Sydney-based brewery that put together a special limited edition Canada Day whisky: Wayne Regretsky. The artwork on the bottle features an illustration resembling the Canadian Hockey legend looking a little worse for wear while leaning on his hockey stick. It even gives No-. 99’s legendary “You miss 100% of the shots you don’t take” quote a whole new meaning.

The artwork is what really tells the story of the drink, but the taste has a hint of Canada as well, “with a Canadian twist of maple spirit.”

Introducing our super limited spiced maple spirit Wayne Regretsky, just in time for 🇨🇦 Canada Day 🇨🇦 on Saturday. For one day only you'll be able to get this in your mouth at @thestuffedbeaverbondi, @newtown_hotel, @harlequin_inn, @arthousehotel and our tasting bar. Artwork @scottydubya_.

We reached out to the team at Young Henrys for some insight and motivation behind the product, and how they celebrated our National holiday in Australia.

“Canada day actually came to us from some local Sydney (Canadian) bar tenders. We made two Canada day beers in the past, which were launched in their venues. This year we created Wayne Regretsky after interest from some venues,” explained Oscar McMahon, one of the founding members of the company.

“We've had food trucks with real poutine, that people will lineup for ages and generally go crazy over. This was the second time we've celebrated Canada Day at our brewery tasting bar, with both times being a huge success. People dress up in hockey outfits, flags and this year even Vikings.

The name came about like the names of any of our beers and spirits, by everyone throwing their best punny jokes around the office and the biggest laugh sticking. Once we had that we gave it to one of our illustrators Scotty Williams, who nailed it as usual. “

Some of their other products, which range from various sorts of ales, lagers, IPA’s, ciders and gin, are beautifully illustrated by Williams, which are featured on his Instagram page, and on Young Henrys.

I had the pleasure of designing @younghenrys Maple Spirit 🍁 to celebrate Canada Day this Saturday. It's super limited and will be available at only a hand full of places as well as their tasting bar. Check out their Insta for more info. ✌🏻️🍻

I had the absolute pleasure of being asked by @younghenrys to design the label for their Winter Hop Ale. It dropped today and is available at all good pubs and bottlo's 🍻⛺️

I had the pleasure of working with the legends over at @younghenrys on a poster for their award winning Noble Cut Gin. Thanks so much for getting me involved guys!

Unfortunately, the maple spirit was a one-time thing, and isn’t available for sale.

This isn’t the first time a whisky has been tailored after the most prolific point producer of all-time. Gretzky’s own company, Gretzky Estates Winery, just released Gretzky Whisky.

The creativity from Young Henrys’ and Williams is brilliant, and is hands down our favourite Gretzky-styled spirit. You could say it’s “A Great One,” and it reportedly works better on ice, but we can’t confirm nor deny.

(H/T to /r/Hockey, and big thanks to Oscar McMahon and Aaron Castle from Young Henrys)