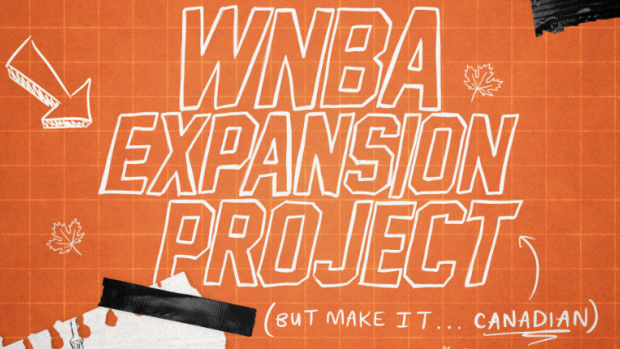 As the WNBA’s much anticipated 25th season tips off tomorrow night with regular-season matchups starting, we are dialled into the amazing talent that is housed within the league.

Though with all of the excitement for this coming season following the league’s tremendous spike in popularity, we can’t help but long for the day a WNBA franchise makes its way north of the border!

So of course, we decided to take things into our own hands for the day that commissioner Cathy Engelbert opens up the floor on potential cities and thinks of adding a Canadian franchise to the already incredible list of WNBA franchises.

So without further ado, here is our WNBA Expansion Project...but make it CANADIAN.

When thinking of our friends out east, we definitely get all of the coastal sealine vibes. So we decided to pay homage to them and give Charlottetown the fisherman makeover. Inspired by the New York Islanders retro fisherman logo in the 1996-1997 season, the Charlottetown Islanders are paying homage to Willem Dafoe in The Lighthouse and honestly, we think he’d be a pretty awesome celebrity ambassador for the team. Though of course there is a QMJHL team by the name already, we just thought it'd be fun to put our own personal twist on it!

When thinking of Edmonton, paying homage to Canada’s biggest industry that comes straight out of Alberta, it's a no brainer to think of the oil sands so we thought it’d be ideal to follow the Oilers' footsteps and go with the Sandstorms. And even better? The team’s victory song would be of course Sandstorm. Absolutely electric vibes out of Edmonton and we’re dialled RIGHT IN.

Rocking the red, white, and blue that many fell in love with when worn by the Montreal Expos, the Voyageurs get their namesake from the Montreal Voyageurs hockey team who were the AHL affiliate for the Montreal Canadians (renamed Nova Scotia Voyageurs in 1971).

The team’s logo of course features that classic maple leaf and allows the potential Canadian team to stand out within the league.

While the Toronto Huskies name is almost set in stone as the name of any potential sports teams relocating to the Six, it’d be pretty awesome to see Toronto rock a different name potentially. If there’s one thing iconic about Toronto, it’s that beautiful skyline. The CN Tower in ALL of its glory. Though of course there is already a Chicago Sky in the league, having the Skyliners and a little rivalry in the clouds sounds pretty awesome to us!

Paying homage to Vancouver’s basketball roots, the team’s colour scheme is inspired by the Vancouver Grizzlies. When thinking of Vancouver, one of the first things to come to mind definitely is the beautiful Rocky Mountains and the 2010 Vancouver Winter Olympics, so why not give them the fitting name of the Vancouver Blizzard? Honestly, this jersey absolutely slaps and we lowkey may even rate it as our favourite.

So there you have it, folks! These were some of the team concept ideas we came up with on the potential that the WNBA were to one day travel north to Canada.

Let us know what you think!​