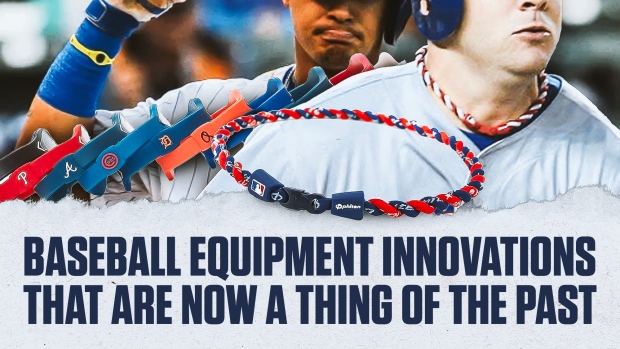 Baseball equipment innovations that are now a thing of the past

If there’s one word to describe baseball, it has to be tradition. It’s America’s past time, and if there’s one thing we can learn from the game it’s the strong deep-rooted love for unwritten rules.

So just like baseball’s past, the equipment within the game has generally stayed the same for years.

We mean, there’s not exactly a way you could turn a batting glove into a piece of hyper technology like the many innovations we’ve seen within hockey. Though it would have been sweet to see some Reebok Pump baseball cleats, especially for the poor ankles crowd.

But that isn’t to say that there haven’t been moments when baseball hasn’t tried to break that fourth wall. And we’re positive that many of you had even tried some of these items within baseball that we don’t see within the game anymore.

Disclaimer: before we jump into it, we’re just going to mention that we will not be going down the rabbit hole of pine tar or corked bats because that’s just an entirely different ballgame.

We swear these necklaces were like the Jeep wave equivalent of “Hey, I play baseball!”

These popular necklaces made by the company Phiten were huge within the baseball community and were said to contain titanium that helped players expand and increase their physical and mental potential. As the equipment was said to have a special electrical charge to increase performance and relieve pain, we’re getting the vibe that these things may have been more of a placebo effect to give players a boost of morale as scientists have come out to say there is no scientific evidence that these things truly work.

We won’t lie, these bats were actually pretty cool when they first hit the market and still are due to the intent behind the innovation. The Mako Torq bat is actually a great bat that has a nice sweet spot that can get your ball to travel far, but the bat’s unique handle is what has people skeptical of its potential. The 360-degree rotating handle gives batters the potential to naturally rotate their wrists and stops hitters from rolling their hands over when making contact.

Though we don’t see too many of these bats anymore, we can’t go without giving it a round of applause for both innovation and actually being pretty good.

If you thought that the titanium necklace fad was big, then you have to remember Power Balance Bands.

These bracelets were huge in other sports as well, but there definitely was a certain kind of love for these bracelets amongst MLB players. If you think of Yasiel Puig, it almost goes hand in hand to think of these bad boys. These bracelets were plastic and had a hologram sticker on them that were said to improve an athlete's balance, flexibility, and strength...Though very sporty and sleek, it turned out that these bracelets weren’t all to what they lived up to be as the company actually was hit with a lawsuit back in 2011 when the bracelet wasn't essentially able to turn any player into Barry Bonds.

We know, we’re still pretty shocked about these not living up to their potential too.

Now, this helmet right there was an innovation. Though this helmet was majorly seen at the youth level and were major marketers for girls especially, it was the perfect helmet for anyone who liked to rock a ponytail but didn’t want to feel the weird discomfort of your head being squashed into a helmet while still looking stylish. Though of course when asking your parents to get you the helmet because of the hair pain normal helmets brought along, you were given the firm no and never thought back on them again.

So there you have it, folks, there are just some of the most popular baseball equipment innovations that are a thing of the past. If you have any others you can think of, let us know at BarDown on Twitter!