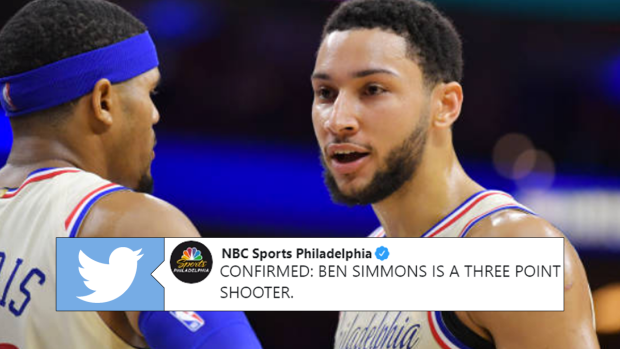 Ben Simmons hit a three earlier in the season, and despite all the noise it brought from the crowd it felt like you could ALMOST hear his sign of relief.

While it brought with it a rousing reaction, as you may expect after going 0-17 to begin his career. While the mocking was relentless, it almost seemed to catch Wells Fargo Center off guard when he tossed up one from distance. The reaction was more of a slow realization.

Simmons hitting his 2nd three got Philly looking like they just got the chips with the dip 😂😂 . (🎥: NBA TV)

You’d think he just hit a buzzer-beater to win the game with that kind of reaction.

So embarrassing that we celebrate Ben hitting his second 3 pointer with 3 season under his belt.

This made me happy to see