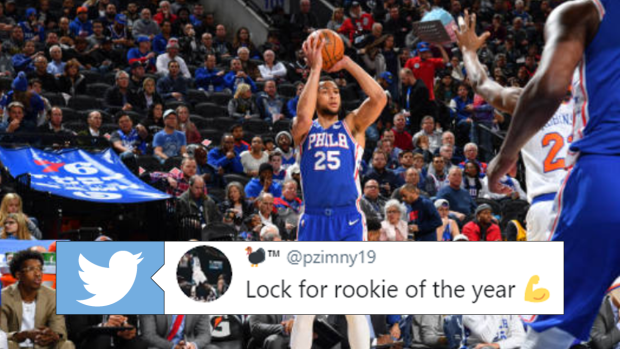 Philadelphia 76ers’ Ben Simmons has emerged as one of the more dangerous players to play against, mixing in a dominant presence in the paint with the vision you’d find in a star point guard. There has always been one thing that’s hindered the Australian… he CAN’T hit a three.

Scratch that… he can!

It had become a running joke that Simmons was unable to hit from distance after beginning his career 0-for-17 from behind the arc. No matter how many offseason videos emerged of Simmons draining three pointers, he never seemed to be able to hit it during an actual regular season NBA game.

Until now, when Simmons rose up like an absolute hero and drained his first triple on the New York Knicks.

It's scary to think about Simmons as a player if he adds any sort of three-pointer consistency to his game, but we’ll take his bucket for its entertainment value. As you may expect, the basketball flew off the handle.

Against the Knicks doesn’t count

Lock for rookie of the year 💪

Ben Simmons in the locker room after the game: pic.twitter.com/HgXHs4lL4d

Him walking into the locker room at halftime pic.twitter.com/HaIkGOguMx