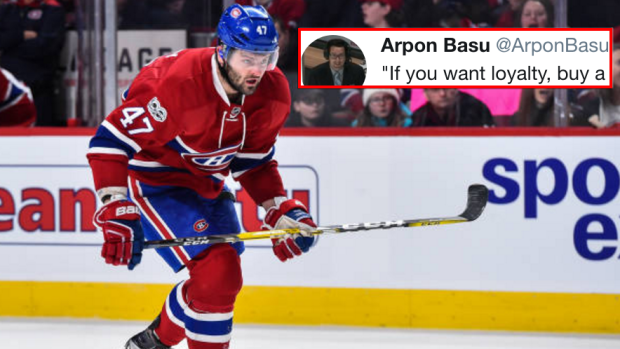 Loyalty is a word that often gets thrown around in sports, especially during free agency.

If a star player leaves, he or she has no loyalty.  If he or she stays, however, their loyalty is commended by the sports world.

The truth is, though, there are so many different factors that go into a free agent's decision to stay or leave.

Money, term and opportunity are a few things, for example, that every free agent has to take into account before making a decision.

Sunday, Marc Bergevin was asked if he expected loyalty from Alexander Radulov after Montreal took a chance on the forward who decided to come back to the NHL from the KHL and the answer he gave was wonderful.

"If you want loyalty, buy a dog" - Marc Bergevin on whether he expected loyalty from Radulov after taking a chance on him last year.

Hockey is a business like every other sport, and at the end of the day, sometimes players should do what's best for them rather than let the "loyalty" factor decide their future.

Sure, every fan wants their players to be loyal, but when players do leave, they shouldn't be vilified for doing what they think is best for them and their families.

Instead, they should be supported, but that's rarely the case.

Either way, the biggest thing to take away from the quote is there's no new news on the Radulov front, so keep sitting tight Montreal fans.