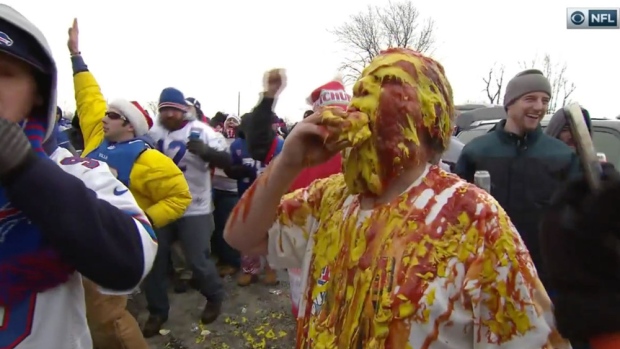 If there's a group of NFL fans that know how to throw an entertaining tailgate party, it's Buffalo Bills fans. It's almost like every home game a new video makes its way onto the Internet of something crazy that took place during the Bills' tailgate.

With the Bills at home on Sunday hosting the Cleveland Browns, you just knew Bills fans were going to show up and do something silly to grab the attention of everyone, and that's exactly what this man did when he allowed other fans to shower him in mustard and ketchup.

As heard in the broadcast, the fans name is Ken "Pinto Ron" Johnson, and he's a legendary Bills' tailgater who attends every Bills' home and away game, and annually has himself covered in condiments for the entertainment of others.

You never know what you're going to see at a Bills game...