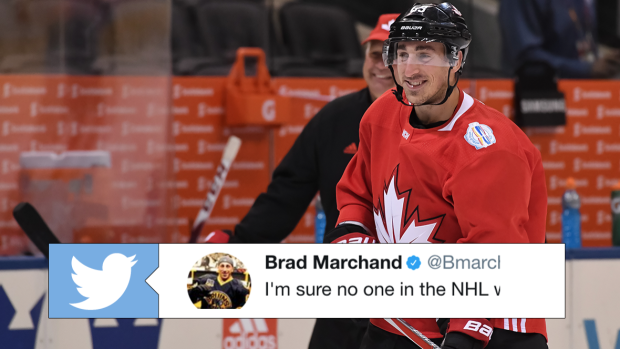 The NHL and hockey fans know how the players feel about not being able to go play in the 2018 winter Olympics, but in case you don't know how they feel, here are some quotes from hockey's biggest stars:

Alexander Ovechkin released a statement on #NHL players being omitted from the 2018 Winter Olympics. . Full story on TSN.ca .(Via @capitals)

Disappointing news, @NHL won't be part of the Olympics 2018. A huge opportunity to market the game at the biggest stage is wasted..

McDavid on Olympics: 'I'm really upset about it': https://t.co/a74EN0YCDD pic.twitter.com/LJF4bXqBI3

On Thursday, the medals were unveiled for the 2018 Olympics and Marc-Edouard Vlasic let the NHL how he felt about not being able to have a chance to win one with this tweet:

On Friday, Brad Marchand echoed Vlasic's disappointment with a sarcastic tweet of his own:

I'm sure no one in the NHL wanted one of these https://t.co/fm59Y2FD1q

As much as Marchand and his peers want to go to the Olympics, nothing they say or do at this point will make that become a reality.

Still, it's nice to see them continue to share their feelings on the decision and we hope when the 2022 Olympics roll around, we won't see these tweets (In other words, we hope NHL players will be playing in the Olympics next time around).