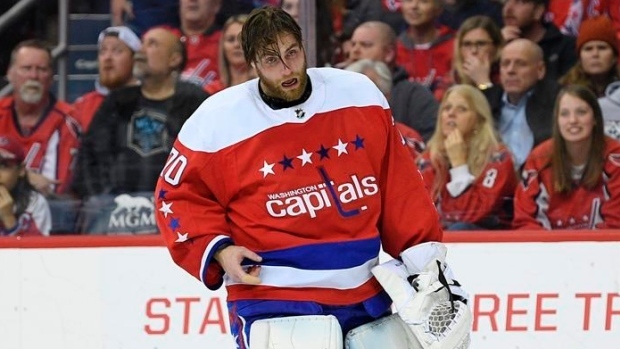 The Washington Capitals shored up their crease by locking up back-up Pheonix Copley to a three-year, $3.3 million deal on Monday, but in doing so, it raised an interesting discussion point on how the team's goaltending situation will shake out in the future.

With signing Copley, the team now has a goaltender under contract that will be eligible for exposure in the upcoming expansion draft for the NHL's 32nd team in Seattle. Ilya Samsonov is expected to be the Capitals goaltender of future, but depending on the timeline of his development ,the team will have to make a decision on starter Braden Holtby, who's signed through next season at $6,100,000 and will be eligible for unrestricted free agency at age 30.

Wow the Caps have some interesting contract years coming up.

Speaking with Stephen Whyno of The Associated Press, Holtby addressed his UFA status come the summer of 2020.

“It’s human nature to think about it,” Holtby said. “But outside of maybes, you have no idea. It’s a long ways away. A goaltender’s life can change pretty quickly, so you’ve got to stay in the moment and just play.”

The Capitals' current depth in net is a decent problem to currently have, but down the road, it could create a logjam at the NHL level depending on how GM Brian McLellan plays his cards. Samsonov isn't the only prospect waiting in the wings. Vitek Vanecek was recently named an all-star over Samsonov and noted that the team will be forced to make a decision one way or another.

“I like Vitek, too. Samsonov is coming,” MacLellan said. “Holtby is Holtby. He’s an All-Star goalie. And Copley is finding his way as a good No. 2, so I think it’s important for us to have depth as an organization, protect yourself on injuries.

“You watch the league when injuries happen you need good guys to come in and play. I feel good about all four of these guys right now.”

When asked about the potential for Holtby to walk, MacLellan remained confident that the team will find a replacement if Holtby ends up leaving.

“It’ll work itself out, I think,” general manager Brian MacLellan said. “We’ll see how Samsonov comes and what our situation is cap-wise and the signings we determine to make.”

Holtby's current save percentage is the same as last year's -- .907 -- but with increased expectations after winning the Stanley Cup, Holtby's true test will be his performance in the playoffs.

Depending on his contract demands, the Caps could be forced to look internally on who will guide them in the crease come the 2020-21 season, or look elsewhere if Samsonov, Copley or Vanecek  aren’t ready to take over the reins.