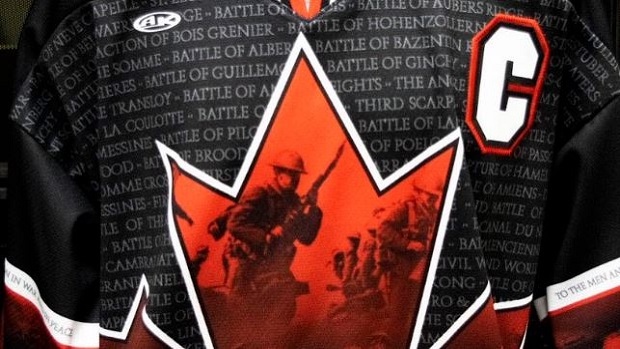 The Brampton Beast play five of their next six games on home ice including a matchup against the Toledo Walleye this upcoming Sunday on Remembrance Day.

When the Canadian club hits the ice on Sunday afternoon they won’t be rocking their regular home jerseys. Instead, they’ll be wearing incredible Remembrance Day themed jerseys that feature all sorts of tributes from front to back.

The @bramptonbeast will be rocking these jerseys on Remembrance Day 🇨🇦

The jersey features images from World War I, World War II and modern day, and also lists every major battle, campaign and operation the Canadian Armed Forces have been involved in for more than 100 years.

Remembrance Day jerseys look amazing! The team will be wearing these this Sunday, November 11th at 4:00 PM for our Remembrance Day Game, followed by our Post-Game Skate! #RoarAsOne

Brampton’s ECHL team has made it an annual tradition to rock a Remembrance Day commemorative jersey whenever the day rolls around on the schedule, and this year’s jersey certainly ranks near the top. However, they’ve all been pretty awesome.

Another Kotak Law Military Appreciation game, another AMAZING jersey to honour those who served! Bid on one or more of these specialty jerseys at the game this Sunday, November 13! ⚫️⚪️🔴 🇨🇦 #RoarAsOne #MilitaryAppreciation #Brampton #ECHL #Hockey #Army #Habs #MontrealCanadiens #Beast

Here it is! Tell us Instagram, what do you think of the specialty jerseys we will be wearing on Military Appreciation Day this Sunday? The jerseys will be auctioned off after the game. #Canada #USA #Hockey #RemembranceDay #Remember #LestWeForget #Veterans #VeteransDay #Habs #Canadiens #Toronto #Ontario #Canada #Canadian #Beast

In partnership with Kotak Law, the Beast have donated 1,000 tickets to members of the Canadian Armed Forces and their families for Sunday’s game and will be donating $4,000 towards Wounded Warriors Canada.

We're proud to host the Remembrance Day Game this Sunday at 4:00 PM! @KotakLaw has sponsored 1000 tickets for members of the Canadian Armed Forces and their family and will be donating $4000 to @WoundWarriorCA!